The Pope Lick Monster is a legendary part-man, part-goat or sometimes part-sheep creature reported to live beneath a Norfolk Southern Railroad trestle over Floyd's Fork Creek, in the Fisherville area near Louisville, Kentucky.

In most accounts, the Pope Lick Monster (named after the Pope Lick Creek below the Pope Lick Train Trestle) appears as a human-goat hybrid with a grotesquely deformed body of a man. It has powerful, fur-covered goat legs, an alabaster-skinned face with an aquiline nose and wide set eyes. Short, sharp horns protrude from the forehead, nestled in long greasy hair that matched the color of the fur on the legs.

Numerous urban legends exist about the creature's origins and the methods it employs to claim its victims. According to some accounts, the creature uses either hypnosis or voice mimicry to lure trespassers to the tressle to meet their death before an oncoming train. Other stories claim the monster jumps down from the trestle onto the roofs of cars passing beneath it. Yet other legends tell that it attacks its victims with a blood-stained ax. It has also been said that the very sight of the creature is so unsettling that those who see it while walking across the high trestle are driven to leap off.

Other legends explain the creature's origins, including that it is a human-goat hybrid, and that it was a circus freak who vowed revenge after being mistreated. In one version, the creature escaped after a train derailed on the trestle which actually links the Pope Lick Monster to the legend of the "Ghost Train" which as also sighted on the trestle. Another version claims that the monster is really the twisted reincarnation of a farmer who sacrificed goats in exchange for Satanic powers.

The Pope Lick Monster, having no actual reported sightings, most likely exists only in the realm of myth and legend. The infamous Pope Lick Train Trestle has become a favorite spot for kids, especially ones conducting lighthearted "bravery tests", daring someone to climb the trestle. This has not always been fun-and-games, however. In the summer of 1987, a young boy fell to his death from the trestle after evading an oncoming train, and this fate was met again by a young boy 13 years later. 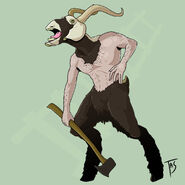 Illustration from
Community content is available under CC-BY-SA unless otherwise noted.
Advertisement