Cryptid Wiki
Register
Don't have an account?
Sign In
Advertisement
in: No Modern Sightings, Dragons and Dragonoids, North America (Minus Mexico and Caribbean),
and 9 more

The Piasa Bird, also called The Bird of the Evil Spirit or The Bird that Devours Men is a fire-breathing winged creature (or dragon) featured in legends of the Illini tribe. It was depicted in one of two murals painted by Native Americans along the Mississippi River near present-day Alton, Illinois. The original was lost and was replaced with a new bluff just a few yards upstream from the original place where it was found.

The creature was said to have snatched members of the tribe living near the river, it had a shuddering scream that was said to shake the earth below. Even though it's not likely that anyone would miss it, it's very sneaky and mischievous; when you hear the scream of the beast, you're dead. Even though it had one weakness it was very hard to take this beast down, it took years and blood spilled just to find out what it's weakness was.

The Natives and Jacques had very different descriptions; Natives thought this was what it looked like: Its body was much the size and shape of a horse; long, white fangs stabbed upward from the protruding lower jaw and flames leaped from its nostrils; two white, deer-like horns angled wickedly from its head. Its huge wings pounded the air with such force the trees bent; its stubby legs held dagger-like talons and its spiked tail wound around the grotesque body three times.

Jacques: "While Skirting some rocks which by Their height and length inspired awe, We saw upon one of them two painted monsters which at first made Us afraid, and upon Which the boldest savages dare not Long rest their eyes. They are as large As a calf; they have Horns on their heads Like those of a deer, a horrible look, red eyes, a beard Like a tiger's, a face somewhat like a man's, a body Covered with scales, and so Long A tail that it winds all around the Body, passing above the head and going back between the legs, ending in a Fish's tail. Green, red, and black are the three Colors composing the Picture. Moreover, these 2 monsters are so well painted that we cannot believe that any savage is their author; for good painters in france would find it difficult to reach that place Conveniently to paint them."

The mural of the Piasa Bird was created on a limestone rock, causing it to regularly require restoration in order to keep the image clear, near the American Bottom flood plain in what is now the Metro East region of Southern Illinois. Each time a member of the tribe passed the painting, they would shoot an arrow at the painting as a salute to Chief Outoga, a practice that distorted the mural even further. It was first discovered in 1673 by a French missionary named Jacques Marquette and a French explorer named Louis Jolliet in the bluffs forty feet above the river.

The image was eventually also seen by Robert de La Salle along with many other French explorers at the time. In the early 19th century, William Dennis created the first sketch of the painting, labeling it the "Flying Dragon". Later accounts included a lithograph by John Casper Wild, and a drawing by Swiss artist Rudolf Friederick Kurz, who described the painting as a "colossal eagle".

The village was a secure and happy place. Chief of the Illini was Ouatoga (Watoga). He was old and had led his tribe in the ways of peace for most of his lifetime. Ouatoga and his people loved their home and their way of life. Then one morning, as the sun began to climb towards the summit of its cloudless sky, terror touched the Illini. The village stirred. A number of younger braves were leaving on an early morning fishing expedition. Some were already on the river in their canoes, others preparing to embark, when suddenly the very earth seemed to shudder with the sound of an alien scream.

The Piasa Bird attacked and took one of the braves and after that it got worse, It came back picking off one by one. The village felt helpless, they turned to their chief to find a solution to this disaster. The creature seemed invulnerable and even the greatest of the village could not beat it. Ouatoga appealed to the Great Spirit. For nearly a full moon he prayed and fasted. Then in a dream he found the answer. The body of the Piasa Bird was not protected under the wings. After offering thanks to the Great Spirit, Ouatoga called the tribe together and devised a plan that could destroy the Piasa Bird.

They fastened and sharpened their arrows waiting for the beast to come to the village to snatch up another person. Suddenly, the scream of the Piasa Bird broke the silence and the winged monster swept into view. Immediately it sighted Ouatoga and with what seemed a shriek of delight, it pounced. As it did, Ouatoga fell to the ground and grasped the strong roots that grew there. The pain of the talons sinking into his flesh inspired him to grip the roots even more tightly. As the Piasa Bird raised its great wings in an effort to carry off its victim, the six braves stepped from their hiding place and shot six poisoned arrows into the unprotected place beneath the beast's wings. Again and again the bird raised its wings to fly. But Ouatoga held fast and each time six poisoned arrows drove into the bird's vulnerable spot. Finally, the poison did its job. With a scream of agony, the Piasa Bird released its hold on Ouatoga and plunged down the bluff to disappear forever in the swift waters of the great river. Carefully, tenderly, the braves carried Ouatoga to his tepee where, in time, he was nursed back to health. Then a great celebration was held in the camp of the Illini. The next day, Tera-hi-on-a-wa-ka mixed paints and, carrying them to the bluff, painted a picture of the Piasa Bird in tribute to the victory of Ouatoga and the Illini. Every time an Indian passed the painting, he shot an arrow in salute to the bravery of Ouatoga and deliverance from the Piasa Bird. 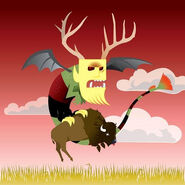 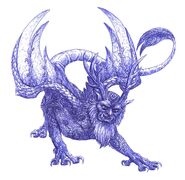