The Pesanta is a monster from the Catalan folklore, is described as an enormous heavy black and hairy dog (some few versions describes it as a cat) with steel paws which it uses to hit anybody who finds in it's way, those paws are holed making impossible to the creature to grab something. In some places of Catalonia is identified as a witch or as an animal creature with an undefined form. It's also unknown if that creature is male or female.

The Pesanta lives in abandoned churches or other ruins and creeps every night into people's homes, entering in through the keyholes, under the doors and even filtering across the walls, then it sits on their chests giving them breathing problems and nightmares. It's very difficult to see it, because if somebody wakes up in front of that creature, the Pesanta will escape so fast that the only thing that person will be able to see is a shadow running away.

Some ways to avoid this creature are spread some millet in the threshold of your bedroom, place a broom next to your bed or pronounce some words that will force it to count all the stars in the sky.

The image of the Pesanta is compared with the phenomenon of sleep paralysis, that causes to the people that suffer it to wake up but not being able to move, they also begin experiment feelings similar to the hallucinations. 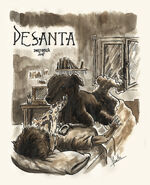 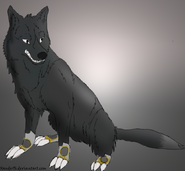