Reportedly sighted in Mexico, United States and even spotted in Russia and Indonesia, the chupacabra has various names. Penanggalan or 'Hantu Penanggal' is a chupacabra-like creature of Southeast Asian mythology. It is a variation of the vampire myth found in the Malay Peninsula, or as Balan-balan in Sabah. It is similar to the Manananggal, a similar creature of Filipino folklore. Some scientists think that the Penanngalan and Manananggal are the same cryptid because they are similar myths of creatures with almost exactly the same features and have a common root under the Austronesian language family. In Thailand it is called the Krasue, in Laos it is the Kasu or Phi-Kasu and in Cambodia, it is the Ap. In Kalimantan (Indonesian side of Borneo), flying head with entrails is called a Kuyang or Hantu Kuyang, while in Bali they are called a Leyak.

In Thailand, Penanggalan is called the Krasue and there is a legend of a certain Khmer princess becoming the Krasue in centuries past after having been executed by burning. The Krasue is under a curse that makes it ever hungry and always active in the night when it goes out hunting to satisfy its gluttony, seeking blood to drink or raw flesh to devour. It may attack cattle or chicken in the darkness, drinking their blood and eating their internal organs. It may also prey on pieces of cattle, such as water buffalo that have died of other causes during the night. If blood is not available the Krasue may eat feces or carrion. Clothes left outside would be found soiled with blood and excrement in the morning, allegedly after she had wiped her mouth. Therefore, villagers would not leave clothes hanging to dry outside during the night hours.

“I live in Indonesia, in West Java. There were reports on such attacks on goats and sheep in some areas in my island. Some sheep or goats were dead with no blood left. They were not eaten, only their blood were sucked until dry. No predators known in my area do this kind of attacks. But, we don't know what attacked the sheep. People began to lock the cages, but it seemed that the animal or animals could open the keys or the bolts to the cages. And to more shocking, some sheep were found outside the cages, dead, but the doors were not opened at all. Some of the sheep owners tried to guard their sheep, and slept on the roof of the cages, but the attacks continued, without their noticing anything, so people began to get scared. And they even put the sheep inside their houses, to keep them safe. The attacks didn't happen very often, but since it was weird, it appeared on the local newspapers. I don't live near the attacks, so I never saw how they looked like. The attacks mostly happened when the dry season got too long. And it happened in areas close to the jungle. There were always many sheep dead in one attack - about 7-20 sheep. There are Chupacabras in Indonesia, too.”

The most common remedy prescribed in Malaysian folklore to protect against a Penanggal attack is to scatter the thorny leaves of a local plant known as Mengkuang (any of the subspecies) which have sharp thorny leaves, would either trap or injure the exposed lungs, stomach and intestines of the Penanggal as it flies in search of its prey. These thorns, on the vine, can also be looped around the windows of a house in order to snare the trailing organs. This is commonly done when a woman has just given birth. However, this practice will not protect the infant if the Penanggal decides to pass through the floorboards. In some instances, it is said that months before birth, family members of the pregnant women would plant pineapples under the house (traditional Malay houses are built on stilts and thus have a lot of room underneath). The prickly fruit and leaves of the pineapple would deter the Penanggalan from entering through the floorboards. Once trapped, a Penanggalan who attacks the house can then be killed with parangs or machetes. As an extra precaution, the pregnant woman can keep scissors or betel nut cutters under her pillow as the Penanggalan is afraid of these items.

Another way of killing the vampire is for some brave men to spy on the Penanggalan as it flies around in the night. Midwives who become Penanggalans at night appear as normal women in the daytime. They, however, can be identified as Penanggalans by the way they behave. When meeting people they will usually avoid eye contact and when performing their midwife duties they may be seen licking their lips, as if relishing the thought of feeding on the pregnant woman's blood when night comes. The men should find out where the Penanggalan lives. Once the Penanggal leaves its body and is safely away, it may be permanently destroyed by either pouring pieces of broken glass into the empty neck cavity, which will sever the internal organs of the Penanggal when it reattaches to the body; or by sanctifying the body and then destroying it by cremation or by somehow denying the Penanggal from reattaching to its body upon sunrise.

Another non-lethal way to get rid of penanggalan is to turn over the body, so that when the head attached back it will be attached reverse side, thereby revealing to everyone what she really is.

Unlike Manananggal, all Penanggal are females and there is no variation in Malaysian folklore to suggest a Penanggal to be male. Another notable difference between a Penanggal and Manananggal is that a Penanggal detaches only her head with her lungs, stomach and intestines attached while leaving the body before coming back and soaking her innards in a prepared container filled with vinegar to fit back into the body.

Additionally, unlike the Manananggal which uses a proboscis-like tongue, a Penanggal is commonly depicted as having fangs. The number of fangs varies from one region to another, ranging from two like the Western vampire to a mouthful of fangs. 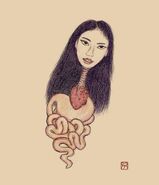 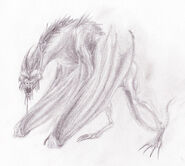 Other types of Chupacabras