Cryptid Wiki
Register
Don't have an account?
Sign In
Advertisement
in: Dragons and Dragonoids, Poisonous and Venomous Cryptids, Cryptid Wiki,
and 7 more

The La Peluda, Shaggy Beast, or La Velue (which is French for "Hairy One") is a supposed dragon that terrorized La Ferté-Bernard in medieval times. It lived near the Huisne, a river in France whose source is near the town of Pervenchères.

The cryptid was described to have an ox-sized porcupine-like body, or possessing a mess of green hair-like projections on its body that are actually stinger-tipped tentacles. Its name is derived from its shaggy appearance. It is also said to be green in coloration, has poisonous stingers that it could shoot from its body, a snake's head, neck and tail, and large tortoise-like feet.

The La Peluda was known to do the following: 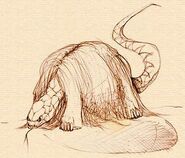 A sketch of La Peluda.

Painted image of the cryptid.

La Peluda in the show The Secret Saturdays.