Cryptid Wiki
Register
Don't have an account?
Sign In
Advertisement
in: Cryptids, Cryptid Wiki, Dinosaurs and Pterosaurs,
and 12 more

The Monster of Partridge Creek

James Lewis Buttler and Tom Leemore were hunting moose near Clear Creek when the animals they were stalking burst away in a sudden rapid fright after having been extremely quiet. They discovered the gigantic tracks of some animal that appeared to be a tail impression. They followed it for a while, until the tracks disappeared into a deep rocky gorge. They later met Georges Dupuy, Fr. Pierre Lavagneux and five unnamed Indians who agreed to search for the monster. They were initially unsuccessful but eventually encountered it near their campsite. They observed it for about 10 minutes and had a very clear look at it.

Lavagneux claimed to have seen the creature again in the same area on December 24, 1907. It carried a deceased caribou in its gaping jaws and left tracks identical to the tracks recorded four years earlier.

The Partridge Creek monster appears to resemble Ceratosaurus nasicornis, a species of carnivorous theropod from the late jurassic most recognisable by the prominent horn on its snout. It is however depicted in the way common at the time for dinosaurs, holding its body up in a kangaroo like posture impossible for dinosaurs. It is described at being 18 feet tall and 50 feet long, estimated to weigh about 30 tons and was grey black in colour.

Its hide is uniquely shown and described as hairy like that of a wild boar, with thick bristles, and its underbelly was plastered in thick mud. It produced a hollow but frightful sound from its mouth, and despite its immense size was able to move via hopping.

The Partridge Creek Monster is most likely, with the provided accounts, a hoax. The story itself was published as science fiction, which makes the account of the monster incredibly unreliable. If such a creature did exist, it would not be depicted in the manner as shown here. Not only was Ceratosaurus known to be much smaller, at 22 feet tall and 12 feet tall, it would have stood horizontally unlike that of a kangaroo and the ability to hop like a kangaroo would most likely be unfeasible for a creature of its weight and size.

The presence of "fur" on the creature is a unique trait to the creature. The presence of feathers on ceratosaurs is currently unknown, although relatives like Carnotaurus are known to have mostly scaly coverage. As such, it is unknown whether a ceratosaur, or a descendant of one like Partridge Creek would possess any form of non-scale coverage. 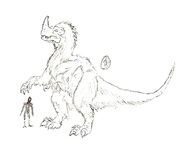 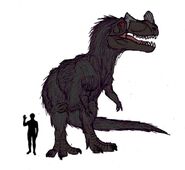