The Parandrus or Tarandrus, is a creature first featured in classical literature of Rome in the book De Natura Animalium and was later found in medieval bestiaries.Much like a chameleon it was able to camouflage itself by changing the colors of its coat. It would do this to evade predatory animals and hunters.

The Parandrus is said to be able to conceal itself by altering its physical appearance so that it can blend in with its surroundings. It is colored like a bear, but is the size of an ox and has long hair. It has the head of a stag with branching horns, and has cloven hoofs.

In Natural History, Book 8, 52, Pliny mentions a beast from Sythia called Tarandrus that can change color. 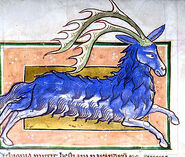