Cryptid Wiki
Register
Don't have an account?
Sign In
Advertisement
in: Cryptids, North America (Minus Mexico and Caribbean), Carnivore,
and 13 more

The Ozark Howler, also known as the Ozark Black Howler, the Hoo-Hoo, the Nightshade Bear, and the Devil Cat, is a legendary creature that is purported to live in remote areas in Arkansas, Missouri, Oklahoma, and Texas. It is typically described as being bear sized, with a thick body, stocky legs, black shaggy hair, glowing red eyes, and prominent horns. Its cry is often described as being a combination of a wolf's howl, an elk's bugle, and the laugh of a hyena.

According to Forrest Galante and his wife Jessica, it turns out that the Ozark Howler is actually the North American red wolf.

Cryptozoologists have speculated that the creature might be a misidentified or unrecognized big cat. Anthropologists and folklorists have speculated that the creature might be a branching off of the Dark Dog of Death found in British folklore, such as the Church Grim, Black Shuck, or the Gytrash. These comparisons note that many versions of the hellhound are described, like the Ozark Howler, as having glowing red eyes. The Ozark Howler also, like these legendary beasts, has been described as a dark omen predicting the death of those who see it.

Chad Arment asserts in his book Cryptozoology that the Ozark Howler myth is a hoax. According to Arment, he and many other cryptozoologists received email messages making claims about Ozark Howler evidence. These messages were tracked down to a University of Arkansas student who had made a bet that he could fool the cryptozoological research community.

However, stories of the Ozark Howler are said to predate this. Jason Offutt, in his new book Chasing American Monsters, writes that "Many people have dismissed the Ozark Howler, but Howler sightings stretch back to the early 1800s." Loren Coleman has endorsed the book as "highly recommended," writing, "Offutt does a special service to the field of cryptozoology with this new book."

The earliest legend of the Ozark Howler is of a meeting between the Daniel Boone and the creature in Missouri in the early 1800s. Boone is purported to have fired his gun at the Ozark Howler in some versions of this story, although there is no evidence that the beast was killed and kept as a trophy.

Whatever the truth of the Ozark Howler, it has inspired generation of artists and writers. In the 1930s, a local press published a small run of a book of folklore about the creature called Tales of the Ozark Howler. A decade later, folklorist Vance Randolph referred to the Ozark Howler by the name Hoo-Hoo in the book Ozark Superstitions. In 1973, the Ozark Howler was re-imagined as a multi-dimensional time traveling creature in Timothy Godwin's short story The Hair of the Black Howler. 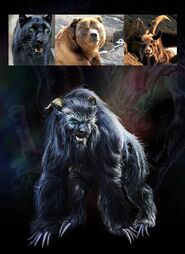 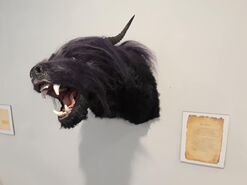 A Sculpture of the Ozark Howler by Michael A Baird 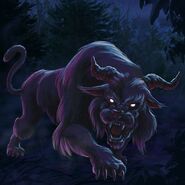