The Orang Pendek, also known as Uhang Pandak, and several other similar translations, is said to be a bipedal ape living in the jungles on the island of Sumatra. Its reported height is commonly between three to five feet, and its fur is short and typically gray or black but sometimes reddish or 'honey' coloured. The name "Orang Pendek" translates to "short person" in Indonesian. It is said to be around 3-6ft and is a red/ brown color.

The creature is said to walk upright on both legs, and be omnivorous, which is common with primates. However, unlike most primates, it is reported to spend almost all of its time on the ground, which is similar among gorillas and other Bigfoot-like cryptids. The Orang-Pendek is said by the Kerinci villagers to possess marvelous strength, enough so to uproot small trees and break rattan vines.

The Orange Pendek is said to often raid fields for their crops, especially potatoes and fruits. Natives of the island claim the creature has a taste for the asian Durian fruit.

Early report of hairy men came from John of Marignolli notes (1338–53), when he visited "Kingdom of Saba" (presumably Java or Sumatra), which he said he seldom caught sight of them, but they would hide into the forest when perceive someone is coming. John sates :

"...they do a great deal of work, sowing and reaping corn and other things; and when traders go to them, as I have myself witnessed, they put out what they have to sell in the middle of the path, and run and hide. Then the purchasers go forward and deposit the price, and take what has been set down."

However, this description may also refers to another humanoid, but more humanlike cryptid from Indonesia, like the Siwil. They are also sometimes called "real hobbits."

Both locals and Western visitors have allegedly seen the Orang Pendek. Some early Dutch colonists have even reported sightings. Many theories and suggested explanations revolve around the myth, including misidentification of an orangutan, a hominid or hobbit-like creature, or an undiscovered ape. With Sumatra being so densely populated with primates, the possibility that an upright gibbon was mistaken for an Orang Pendek is a very good one, although the Gibbon's simian gait would most likely throw off a human-like appearance.

The UK based Centre for Fortean Zoology has taken five expeditions to Sumatra in search of the Orang-Pendek. They have found hair and tracks, heard vocalizations and in 2009 had a sighting.

The shape of the animal's foot prints and recent hair analysis by Copenhagen University suggest that the Orang Pendek is a new species or upright, ground dwelling orangutan.

It could be a surviving Homo Florensiensis. 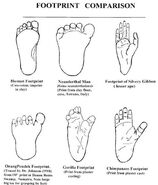 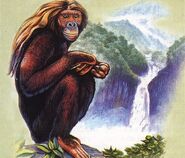 Artist's depiction of Orang-Pendek
Add a photo to this gallery

Retrieved from "https://cryptidz.fandom.com/wiki/Orang_Pendek?oldid=100752"
Community content is available under CC-BY-SA unless otherwise noted.