The Orang Bati is a flying cryptid located in Southeast Asia. These vicious, soaring primates are notorious for kidnapping and carrying away children to be eaten during their nocturnal raids on native villages. Covered with acres of unexplored rain forest, the little known Indonesian island of Seram — the second largest island in the Moluccas group — is said to be the home of yet another bizarre winged primate, known as the Orang-Bati.

Since as far back as the 1500's the Moluccans have told Christian missionaries blood curdling tales regarding a species of nocturnal, airborne predators, which were infamous for their nighttime raids on local villages (such as Uraur), as well as their penchant for kidnapping both infants and small children. As to the purposes for which these alleged abductions took place, one can only speculate… and presume the worst.

Ostensibly related to other winged monkeys like the Javan Ahool, the Mesoamerican Camazotz (which literally translates as “death bat”) or possibly even the North American Batsquatch, tales of predatory flying monkeys hail from across the globe.

That having been noted, there are some researchers who contend that the physical descriptions of these creatures are less like winged primates and more like traditional pterosaurs, such as the African Kongamato.

The natives of Seram, however, insist that their night sky is infested with soaring simians, which they describe as being approximately 5-feet in height. These creatures are also said to bear black, leathery wings, red skin and a long, thin tail.

Aboriginals have further claimed that these animals emit a long “mournful wail” while on the prowl. The description of the “leathery wings” and “blood-red skin” might indicate a gigantic bat-like creatures like the Olitiau.

As if to confirm this fact, the name “Orang-Bati” itself translates from the indigenous language of the Moluccan’s as “men with wings.” Still, some investigators insist that the description of these animals seems to be more in line with that of its Papua New Guinea cousin, the Ropen. This fact also seems to coincide with the purported habitat of the Orang-Bati, which, much like that of the Ropen, consists of a network of caves wedged deep into the side of a now extinct volcano known as Mount Kairatu.

In 1987, English missionary, Tyson Hughes, began an 18 month contract to assist the Moluccan tribes people of Seram Island to develop more efficient farms. Tyson heard stories about Mount Kairatu’s Orang-bati and told them to the rest of the “civilized” world, though he remained skeptical regarding their more vicious traits.

That was until about midway through his contract, when Hughes claims to have had an actual eyewitness encounter with one of the beasts. After this event, Hughes forged a deeper trust between himself and the indigenous Moluccan’s, which he claims is what helped to inspire him to chronicle their horrific stories of this unusual beast, which natives claim haunt the skies over Seram to this day.

It is sometimes thought to be an undiscovered species of giant bat, with a face resembling that of a monkey. Many bats have oddly shaped faces, so this theory seems more likely. 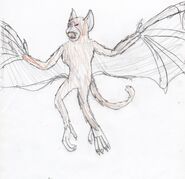 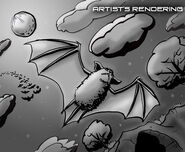 It could be a half monkey half bat hybrid

More Cryptids by your boi
Community content is available under CC-BY-SA unless otherwise noted.
Advertisement