Cryptid Wiki
Register
Don't have an account?
Sign In
Advertisement
in: Octopus, Out of Place, North America (Minus Mexico and Caribbean),
and 7 more

The Oklahoma octopus is a cryptid generally said to inhabit some freshwater, man-made lakes of Oklahoma, including Lake Thunderbird, Oologah Lake, and Lake Tenkiller, where it attacks and kills unsuspecting swimmers. There is no existing footage of it.

Although no physical evidence exists in the case of the Oklahoma Octopus, many point to the high mortality rate and a large number of unexplained drownings in the Oklahoma lakes as a clear sign of its presence. There have also been numerous reported sightings.

The Oklahoma Octopus is most likely a cephalopod, more specifically an octopus according to the description of the creature. This would make the Oklahoma Octopus the only freshwater dwelling cephalopod species. This would not make this animal entirely unique as numerous members of the typically marine requiem sharks live in freshwater environments exclusively, including the Ganges River shark.

Some skeptics doubt the existence of such an oddity. However, octopi have been recorded, at least for brief periods of time, living in freshwater environments. One such case involves a common octopus being caught at Lake Conway in Faulkner County, Arkansas [1] The animal was most likely a released pet that survived long enough to cling onto the gates of the lake's dam [2].

According to the rumor, this freshwater Cephalopod is about the size of a horse and resembles an octopus, with long tentacles and leathery, reddish-brown skin.

The Oklahoma octopus is reported to live in Lake Thunderbird, Lake Oolagah, and Lake Tenkiller, which are all in Oklahoma. These lakes are all freshwater, man-made bodies.

The species most likely has a similar diet to a marine octopus with it eating freshwater species similar to its marine counterpart's prey. However, the drawings in lakes where it is reported to live could be caused by the octopus. An octopus of this size can have up to eight strong tentacles to pull an unwilling human underwater.

Due to the lakes being manmade, the drownings are most likely the result of people getting drunk and not paying attention while swimming.

Also, drowned victims have no sucker lacerations on their bodies.

In Lost Tapes It attacks and drowns 3 people who are celebrating in a lake In Oklahoma.

A drawing of the cryptid 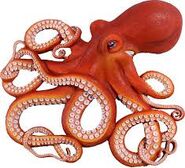