Central African tribes and ancient Egyptians described and depicted a bizarre creature for centuries, colloquially dubbed the “African unicorn” by Europeans. It is known locally by such names as the Atti, or the O’api, resembling a cross between a zebra, a donkey and a giraffe. Despite descriptions from explorers and even skins, Western science rejected the existence of such a creature, viewing it as nothing more than a fantastical chimera of real animals. Determined expeditions uncovered nothing, and it would seem the “African unicorn” was just as mythical as its namesake.

This changed in 1901 when Sir Harry Johnston, the British governor of Uganda, obtained pieces of striped skin and even a skull of the legendary beast from the Congo. Through this evidence and the eventual capture of a live specimen, the animal now known as the okapi (okapia johnstoni) was recognized by mainstream science. The okapi is no less unusual today: it is the only living relative of the giraffe, sharing a similar body structure and its characteristic long blue tongue. However, the markings on its back legs resemble that of a zebra’s stripes. Okapis are solitary creatures that remain captivating to scientists; although not endangered, there is still much to learn about their habits and lifestyle. 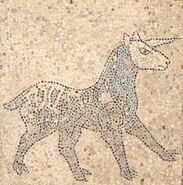 An African unicorn recorded in The Book of Jinn
Community content is available under CC-BY-SA unless otherwise noted.
Advertisement