Cryptid Wiki
Register
Don't have an account?
Sign In
Advertisement
in: Lake Monster, Dragons and Dragonoids, Cryptids,
and 16 more

Ogopogo or Naitaka (Salish: n'ha-a-itk, "lake demon") is the name given to a cryptid lake monster reported to live in Lake Okanagan in British Columbia, Canada. In 1926 a sighting is claimed to have occurred at an Okanagan Mission beach. This event was supposedly witnessed by about thirty cars of people who all claimed to have seen the same thing. In 1968 Art Folden filmed what is claimed to be footage of the alleged creature, showing a large wake moving across the water. A computer analysis of the footage concluded it was a solid, three-dimensional object. In 2011, a cell phone video captured two dark shapes in the water. A suggested explanation is that the video shows two logs. Ogopogo has been allegedly seen by First Nations people since the 19th century. The most common description of Ogopogo is a 40-50 foot long (12 to 15 m) sea serpent. British cryptozoologist Karl Shuker has categorized the Ogopogo as a 'many hump' variety of lake monster, and suggested it may be a kind of primitive serpentine whale such as Basilosaurus, that lived 40 million years ago. However, because the physical evidence for the beast is limited to unclear photographs and film, it has also been suggested that the sightings are misidentifications of common animals, such as otters, and inanimate objects such as floating logs. It's also possible that it's a plesiosaur, mosasaur or pliosaur. There is a myth that in the middle of the lake, there is a cave, and thats where the Ogopogo lives.

The origins of the Ogopogo's name are unknown, but local lore claims it received the name "on a night in 1924 when the strains of an English music-hall song were first heard in the city of Vernon". The song referred to is The Ogo-Pogo: the Funny Foxtrot. However, the name Ogopogo was used over 10 years before this alleged beginning, leading many to believe the song actually got it's name from the monster, rather than the other way around.

Kelowna, British Columbia’s Daily Courier is reporting two scientists have agreed to analyze the remains of a mysterious-looking specimen found along the shore of Okanagan Lake.

A tissue sample of the creature will be sent to a researcher in Ontario for DNA testing, and the carcass itself will be examined by a scientist in Alberta.

The remains were found two weeks ago by Kelowna resident Dan Poppoff as he paddled his kayak near the far end of Lakeshore Road. For now, he’s still got the carcass, which measures more than a meter-long in his freezer at home.

Poppoff is reluctant to suggest the strange-looking carcass might be an example of an Ogopogo, the legendary inhabitants of Okanagan Lake.

But he is interested in finding out just what it is. He contacted Arlene Gaal, a Kelowna woman who was written extensively on Ogopogo sightings over the years.

Gaal is making arrangements to send the tissue sample and carcass to the two researchers, who she declines to identify.

“If I name them, people will be calling them left and right, and they won’t be able to get on with the business of determining just what this creature is,” Gaal said late in June.

The name "Ogopogo" is a palindrome, meaning it is spelt the same both backwards and forwards.

Swimming in the lake. 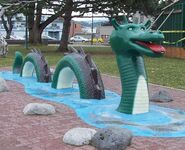 Statue of the creature

a elasmosaurus
Community content is available under CC-BY-SA unless otherwise noted.
Advertisement