The New Louisiana Swamp Monster is a creature that was claimed to live in Louisiana.  The monster was first sighted when a deer hunter at Berwick was hunting at night.

A deer hunter at Berwick, Louisiana, has captured a strange image of something wandering through the Louisiana woods at night. The hunter near Baton Rouge reported to the media that he found this bizarre image on his deer stand camera.

The hunting camera was broken but the memory card was still there and so was this remarkable photograph. NBC news station WVLA, Baton Rouge, feels it looks like a cross between a human and an animal, with long slender appendages and glowing eyes.

Perhaps tongue-in-cheek, the hunter says he just hopes it’s a vegetarian, if he runs into it in the woods again.

The national media, via MSNBC, has widely shown this photograph on television.

Berwick is a town in St. Mary Parish (shown above), Louisiana, United States. The population was 4,418 at the 2000 census. The first white settler to trek through the wilderness in this area was Thomas Berwick, a surveyor from Pennsylvania who was working in Opelousas, Louisiana. He settled along the banks of the Atchafalaya River in the late 18th century. Today the town of Berwick is home to several seafood processing plants and numerous boat companies.

The photos were created as viral marketing for J. J. Abrams and Steven Spielberg's Super 8. The photo was first uploaded on a hunting supply site’s Facebook page and drifted its way to mainstream media. The picture was used for the creepypasta 'the rake', and now is associated with the fictional character. The picture is also used to portray the Ghoul. 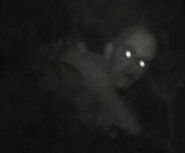