Cryptid Wiki
Register
Don't have an account?
Sign In
Advertisement
in: Pages with reference errors, Reptilian Humanoids, Cryptids,
and 11 more

Nāga is the Sanskrit and Pāli word for a deity or class of entity or being, taking the form of a very great snake specifically the King Cobra, found in Hinduism and Buddhism. The use of the term nāga is often ambiguous, as the word may also refer, in similar contexts, to one of several human tribes known as or nicknamed "Nāgas"; to elephants; and to ordinary snakes, particularly the King Cobra and the Indian Cobra, the latter of which is still called nāg in Hindi and other languages of India. A female nāga is a nāgī or nāginī.

In the great epic Mahabharata, the depiction of Nagas tends to be negative, and they are portrayed as such.

The epic calls them "persecutors of all creatures", and tells us "the snakes were of virulent poison, great prowess and excess of strength, and ever bent on biting other creatures" (Book I: Adi Parva, Section 20). At the same time, nagas are important players in many of the events narrated in the epic, frequently no more evil nor deceitful than the other protagonists, and sometimes on the side of good.

The epic frequently characterizes Nagas as having a mixture of human and serpent-like traits. Sometimes it characterizes them as having human traits at one time, and as having serpent-like traits at another. For example, the story of how the Naga prince Sesha came to hold the world on his head begins with a scene in which he appears as a dedicated human ascetic, with knotted hair, clad in rags, and his flesh, skin, and sinews dried up.

Brahma is pleased with Shesha, and entrusts him with the duty of carrying the world. At that point in the story, Shesha begins to exhibit the attributes of a serpent. He enters into a hole in the Earth and slithers all the way to bottom, where he then loads the Earth onto his head.

The Phaya Naga (Thai: พญานาค; RTGS: phaya nak; literally: lord of nāga) are Naga, mythical serpent-like creatures, believed by locals to live in the Mekong river or estuaries. Common explanations of their sightings have been attributed to oarfish, elongated fish with red crests; however, these are exclusively marine and usually live at great depths. People in both Laos and Thailand attribute the Naga Fireballs phenomenon to these creatures.

Many people, particularly in Isan (northeastern region of Thailand), believe that the Naga are responsible for unnatural wave phenomena occurring in the rivers or lakes in the vicinity. It is also frequently claimed that the serpent-like demigods are responsible for marks on common objects, such as car hoods or house walls.Cite error: Closing </ref> missing for <ref> tag

In Pahang folklore the Seri Gumum Dragon (سري ݢوموم) is a legendary giant serpent locally called Nāga and commonly described as taking the form of an Asian dragon, that inhabit the Chini Lake in Pahang, Malaysia.[1] There have been a variety of legends associated with the creature in the oral literature. The notable one is related to the origin myth of the lake itself,[2] while another legend narrates about a love story between female Seri Gumum and a male Nāga called Seri Kemboja that leads to the origin myth of Tioman and Lingga Islands.[3][4] 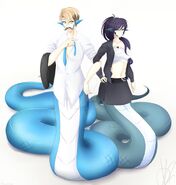 Naga as a Jinn
Community content is available under CC-BY-SA unless otherwise noted.
Advertisement