Cryptid Wiki
Register
Don't have an account?
Sign In
Advertisement
in: Cryptids, South and Central America, North America (Minus Mexico and Caribbean),
and 6 more

"I was thinking about countries where crypto creatures are said to inhibit... I started with Canada and the Ogopogo, onto the U.S. with the Mothman and the Jersey Devil, then continued with Scotland's Loch Ness and Australia's Yowie. Then I got to Egypt and thought of the mummy. But wait! Have there ever actually been stories of people claiming to see mummies walking around the Nile? I know there were old monster movies from the '40s and '50s of mummies, and stories of archaeologists who got sick and died after they went into King Tut's tomb, but have there ever been any mummy sightings reported?"- Gerald H

Death rituals were an important part of Maya religion. The Maya greatly respected death; they were taught to fear it and grieved deeply for the dead. They also believed that certain deaths were more noble than others. The Maya were a ritualistic people, who paid great respect to the destructive nature of their gods. They had many traditions to commemorate the recently deceased and worship long-departed ancestors. People who died by suicide, sacrifice, complications of childbirth and in battle were thought to be transported directly into heaven.

Before Spanish influence, there may not have been a common idea of the afterlife. The Yucatec Maya believed that there were different routes after death. A pot from a Pacal tomb depicts ancestors of Maya kings sprouting through the earth like fruit trees and together creating an orchard. The Maya had several forms of ancestor worship. They built idols containing ashes of the dead and brought them food on festival days. Alternatively, a temple could be built over an urn. The most common way of sacrifice was cutting the abdomen, and taking out the heart.

There have been many archaeological discoveries of lavish tombs within ceremonial complexes from the Classic period. However, only a Maya city’s most important ruler was buried in this way. These aristocrats were placed in tombs at the bottoms of funerary pyramids that sometimes consisted of nine stepped platforms, perhaps symbolizing the nine layers of the underworld. Other temples were constructed with 13 vaults the symbolizing the layers of the heavens in Maya cosmology. These temples reflected the continued worship of these nobles. In some instances, members of the royal family or young attendants would be sacrificed to accompany the lord in death.

The tombs were filled with precious goods including fine polychrome pottery, effigy figurines, jade and marble pieces, masks, mushroom figures. While these figures were found in Maya tombs, many of these items were also used in the service of food, drink and for additional ritual purposes. Obsidian and exotic shells have also been found in Mayan tombs. In the Tomb of the Red Queen inside Temple XIII in Palenque, the remains of a noble woman and all the objects inside the sarcophagus were completely covered with bright red vermilion dust, made of ground cinnabar, perhaps intended to suggest blood, the symbol of life.

Other elite members of society were buried in vaults. The bodies of higher-ranking members of society were buried inside sarcophagi. They sometimes were buried in crypts or underneath the family home. These funerary constructions of the royal often destroyed the residence itself. Commoners were also buried near or under their houses. These graves did not have extensive burial offerings, but often contained objects that identified the individual: a tool or possession.

KPRC has announced that residents in Fairfield, Texas are living in fear ever since a figure, which has been described as a “mummy,” began rearing its head in their neighborhood.

Cypress homeowner Jon Hill — who called the police after claiming to have seen the entity in the front yard of his home on Chestnut Falls Drive in Fairfield — which is located in Cypress — described the being:

Other neighbors said they are also concerned about this “thing” and have notified the police. They claim it’s been spotted on more than one occasion. Local resident Steven Scheiffele had this to say:

“It’s creepy, especially since he’s here in the neighborhood with the kids and stuff.” Harris County sheriff’s deputies recommended that homeowners who see what they assert is merely a man dressed as a mummy in their yard call 911 immediately.

The Bandage Man Of Cannon Beach

The Bandage Man is a cryptid or ghost purported to be seen near Cannon Beach, Oregon.

The Bandage Man appears on the short approach road connecting US Highway 101 to Cannon Beach, between the town and where Highway 26 intersects with 101. He is always reported to be covered in bloody bandages, as well as emitting a horrible stench, that of rotten flesh. Occasionally the spirit's limbs appear to jut out at bizarre angles. He is rumored to be the ghost of a logger who died in a sawmill accident.

The Bandage Man appears to haunt one particular stretch of road attempting to grab and latch onto any stationary or slow moving vehicles, especially trucks, and open roofed cars, such as convertibles. The phantom will often attempt to attack the drivers, sometimes breaking glass windows, leaving it broken well after it's disappeared. It will remain on the vehicle, disappearing only right before the car reaches the town of Cannon Beach. The Bandage Man is said to sometimes kill and eat dogs and cats, and speculations have spread that the specter has killed several humans. The fact that this entity can interact with other living beings and their vehicles is surely something of note.

That particular road was a popular destination for teenage couples to make out. In 1960, an unnamed couple arrived at the area frequented by The Bandage Man, and attempted to make love. Amidst this love making, however, they noticed the car was rocking back and forth. They looked up and saw what appeared to be a man, completely covered in blood-stained bandages. He was latched onto the back of their truck, staring at them, and slamming his fist against the window. Terrified, they drove off, the man still pounding at the back window of the pickup truck. However, when they stopped, he was nowhere to be seen. Since then, people have reported to see the Bandage Man when driving on that decommissioned road.

The Bandage Man is also mentioned in Ghosts, Critters & Sacred Places of Washington and Oregon. The Bandage Man legend is currently being adapted into a movie directed by first time independent filmmaker Sebastian Bembenek and is being filmed on sight in Cannon Beach Oregon.

A traditional explanation that could work is that mummy sightings are of the reanimated corpses of people that were converted into Mummies.

They could possibly be some sort of Alien species, or perhaps a human or ape-like species.

Many believe that living Mummies are no more than made-up stories. 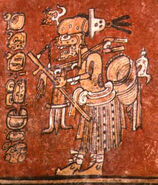 Mummy from the smithsonian