Mušḫuššu (formerly known as Sirrušu or Sirrush) is legendary creature depicted on reconstructed Ishtar Gate of the city of Babylon.

Mušḫuššu is dragon owned by sun god Marduk. It gave rise to the Lernaean Hydra of Greek mythology and ultimately the modern Hydra Constellation.

Bel and the Dragon, a deuterocanonical Biblical text, relates a story that Koldewey thought involved a sirrush. In a temple dedicated to Bel (Nebuchadnezzar's god), priests had a "great dragon or serpent, which they of Babylon worshiped."

Daniel, the protagonist of the Book of Daniel, was confronted with this creature by the priests in the apocryphal text. They challenged him to match his invisible God against their living god. Eventually, Daniel poisoned the creature.

German archaeologist Robert Koldewey, who discovered the Ishtar Gate in 1902, seriously considered the notion that the sirrush was a portrayal of a real animal. He argued that its depiction in Babylonian art was consistent over many centuries, while those of mythological creatures changed, sometimes drastically, over the years. He also noted that the sirrush is shown on the Ishtar Gate alongside real animals, the lion and the rimi (aurochs), leading him to speculate the sirrush was a creature the Babylonians were familiar with. The creature's distinctly feline front paws seemed incongruous, and gave Koldewey some doubt. However, In 1918 he proposed that Iguanodon (a dinosaur with birdlike hindfeet) was the closest match to the sirrush (Sjögren, 1980).

Cryptozoological speculation regarding sirrush was also presented by Adrienne Mayor and Bernard Heuvelmans. 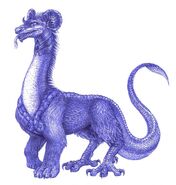