For centuries, tales of large “ape-men” in East Africa have captivated explorers and natives alike. Numerous tribes have legends of massive, hairy creatures that would kidnap and eat humans, overpowering them with their ferocity and strength. The creatures go by many names, among them ngila, ngagi, and enge-ena. In the sixteenth century, English explorer Andrew Battel spoke of man-like apes that would visit his campfire at night, and in 1860, explorer Du Chaillu wrote of violent, bloodthirsty forest monsters. Up until the twentieth century, many of these tales were ignored or discounted. In 1902, German officer Captain Robert von Beringe shot one of these “man-apes” in the Virunga region of Rwanda. Bringing it back to Europe with him, he introduced the world to a new species of ape: the mountain gorilla (Gorilla Gorilla Beringe, in Beringe’s honor).

Today, mountain gorillas are known to be communal, largely docile herbivores that live in the Virunga Mountains in Central Africa, and in Bwindi National Park in Uganda. Mountain gorillas are threatened by poaching and civil unrest, elusive and often unseen in their activities. No more than 400 remain in the wild today. One of the earliest written accounts of gorillas may come from Hanno the Navigator, a Carthaginian explorer who documented his travels along the African coast in 500 B.C. Hanno describes a tribe of “gorillae”, roughly meaning “hairy people”. It is unknown whether Hanno referred to gorillas, another species of ape, or humans. Nevertheless, his description served as the inspiration for the modern name “gorilla”.

Gorilla as a cryptid 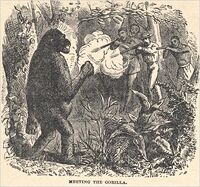 Add a photo to this gallery
Retrieved from "https://cryptidz.fandom.com/wiki/Mountain_Gorilla?oldid=96933"
Community content is available under CC-BY-SA unless otherwise noted.