Cryptid Wiki
Register
Don't have an account?
Sign In
Advertisement
in: Cryptids, Cryptid Wiki, Flying and Gliding,
and 10 more

In one of the largest island of Indonesia, exists a creature that has been terrorizing nearby villages for years. This creature is able to fly, and reside in a cave on a mountain named mount Kancing in the province of Lampung. Ular naga (lit. “Dragon snake”) is the scourge of the locals, his reign of terror would take tens of years if measure wasn’t taken.

The mount Kancing dragon snake is described by the locals as flying, winged dragon-like creature. Locals simply said the appearance like that of a “serpent” (they did not specify the shape), but with horse-like head. It also has two wings, different from usual concept of dragons in Asia.

According to Ahmad, a villager, in the past this dragon has been terrorizing the Pesawaran village for years, many small children and babies has been abducted by the dragon and eaten. Because of this, the village member took initiative to trap it by blocking the entrance of the cave with stones. It also has other name; that is “ular kuda” which means “horse serpent/horse dragon”.

The existence of this creature is known from Jejak-Jejak Misterius (Misterious Tracks), a TV documentary about Indonesian cryptids.

Darga, an elder of the said village, is one of the living eyewitness of the ular naga’s terror. He said that the dragon has the habit of abducting small children; when their parent is working in the field or inattentive of their children. The dragon brought its prey to its lair near the peak of mount Kancing.

One occurrence, happened not in pitch-black night but in broad daylight. A mother is harvesting the rice paddy, while her child is left in a paddy hut. When the mother checked her child is gone. Darga said the dragon’s activity is seen almost every day; this means that the dragon is a living creature.

Because of that, few years ago (the year is not specified in the documentary) the villagers blocked its cave with stones, when the dragon is inside. Even tough the terror stopped, majority of the villager has been traumatized and chose to flee to other villages. In the present, only a few family lives in this village.

When Darga is asked about why it also called ular kuda (horse serpent), he said that the shape of the dragon’s head is similar to horse’s head but still the body is like that of a dragon, while gesturing to show the dragon pose when flying.

The dragon could be rhamphorhynchoid pterosaur, like this Dimorphodon 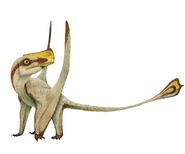 It could be similar to this illustration of Iowa dragon