Cryptid Wiki
Register
Don't have an account?
Sign In
Advertisement
in: Humanoids, Flying and Gliding, North America (Minus Mexico and Caribbean),
and 10 more

The state of West Virginia has had its fair share of strange and often inexplicable events such the visitation of the Flatwoods Monster and Indrid Cold, but perhaps the strangest yet is the arrival of the creature known as the Mothman, who changed the sleepy little town of Point Pleasant forever when it swooped in one cold autumn night in 1966.

Today, Mothman is one of the most well-known cryptids in the world, made famous partly by John Keel's book (later adapted to film) The Mothman Prophecies. Mothman is also hunted in Mountain Monsters on Destination America.

Five men were in a cemetery preparing a grave for burial when they saw something they couldn't explain. Lifting off from the nearby trees was a brown winged creature. The men held to the fact that what lifted off beyond the trees was no bird; it was a humanoid.

The creature was sighted in many places across West Virginia and the surrounding states, but the largest number of sightings happened near the old West Virginia Ordnance Works, an area now known by locals as the "TNT Area."

West Virginia Ordnance Works is an abandoned munitions to the north of Point Pleasant, West Virginia, that dates back to World War II. The facility, during its operation, manufactured ammunition and dynamite. The surrounding area is mostly forest, dotted with numerous grassy clearings and thick concrete domes, called "igloos," that were used to store barrels of gunpowder. The area is also riddled with abandoned tunnels, most of which have collapsed, been sealed off, or become flooded with water. A wildlife sanctuary, McClintic Wildlife Management, now encompasses the area.

In 1979, fishermen in the TNT area reported that chemicals had been left to seep into the ponds, causing it to be labeled an environmental disaster. By the year 1983, the TNT Area was among the country's most-polluted sites.

It was here in the TNT Area on the cold night of November 15th, 1966, three days after the first sighting took place, that two young couples would encounter this bizarre creature. Roger and Linda Scarberry were driving in Roger's black '57 Chevy Bel Air with Steve and Marry Mallette through the area around midnight when Linda noticed, unbelievably, two large, glowing red eyes in the darkness beside the old North Power Plant, and screamed. They soon learned that these eyes belonged to something that looked frankly human, about 7 feet tall with wings folded against its back. Roger stalled in the road for a minute, inspecting the strange creature. The four realized immediately that their spectacle was no ordinary bird. The true horror began, however, when the creature spread its wings and pursued them down Highway 62 to the Point Pleasant city limits at speeds exceeding 100 mph.

The four arrived in town, startled and confused, and with no sign of the mysterious bird that had chased them. Roger parked his car at the edge of town and they discussed their encounter, eventually deciding that what they saw was nothing more than an aberrant bird, and in an attempt to face their fears they again drove towards the TNT Area. It wasn't long before they saw the creature again, apparently waiting on them beside Route 62. The couples now realized that their stalker was no bird, but in the instant that the car's headlights landed on the creature it lifted vertically into the air with tremendous speed and disappeared above the tree line.

This time when they arrived into town they went to the Mason county courthouse and told their story to Sheriff George Johnson and Deputy Miller Hallsted. Two hours later, City Police began investigating the area, only to return empty-handed. The next day, a press conference was held and the local press began printing on the story, causing others to come forward with previous and future sightings. This was the major event that started it all. In the November 16th issue of the Point Pleasant Register, the strange encounter would be brought to the public eye with the headline "Couple Sees Man-Sized Bird...Creature...Something."

The strange encounter in the TNT Area was a harrowing experience for everyone involved, and on the morning of November 16th, 1966, Linda Scarberry was rushed to the hospital by her father after experiencing a nervous breakdown. On the phenomenon, Roger Scarberry stated, "I'm a hard guy to scare, but last night I was for getting out of there."

This creature would be seen throughout the next thirteen months in Point Pleasant, and it was estimated that there were over 100 sightings within this time, though these are unidentifiable reports and the actual number of reported sightings may be quite lower. Mothman witnesses were also harassed by the Men In Black who wanted them not to speak about the creature. The strange sightings all seemed to culminate in the collapse of The Silver Bridge on December 15th, 1967.

Many similar cryptids and creatures have been seen worldwide. The sightings are similar to Mothman in many ways, including the fact that most of them seem to be heralds of impending disasters. Some of the places Mothman or its fellows have visited include a mine in Freiburg, Germany, where a Mothman-like creature scared miners away shortly before a collapse. Another notable visit was to the nuclear plant at Chernobyl, where a creature haunted the facilities for a while before the famous nuclear meltdown. There were also two Mothman pictures taken in New York on 9/11 and multiple sightings before the Minnesota bridge collapse.

Some believe that the Mothman tries to warn people about disasters about to happen. Such as the Freiburg and Chernobyl sightings listed above. However, since there only seems to be one Mothman instead of a bunch of his kind, and since he seems rather paranormal, these sightings are not of much interest to cryptozoologists who want to discover new kinds of creatures.

Mothman is described as a bipedal, winged humanoid. Despite his name which was given to him by newspapers, he is in no way moth-like, and has an appearance more like that of a large humanoid owl. His coloration varies from Black, gray, to even brown, although its is usually the darker shades. He is often reported to be about 7 feet tall, with a wingspan of about 10 to 15 feet or more, plus the ability to fly over 100 mph. Sometimes hes described as not having a head with the two huge red eyes set in the chest. These eyes are reported to be glowing, or at least reflective. The details of his face and his feet have never been adequately described. One witness who saw the face clearly, could only say that the details were horrible and monstrous. She had terrible nightmares and nearly suffered a nervous breakdown.

Anyone who gets a close look at the Mothman seems to suffer from extreme fear and psychological distress, sometimes lasting for months or years afterwards. In particular, people say that a sense of pure evil overcomes them when they see Mothman's eyes.

He can fold his wings and walk with a weird shuffle that many witnesses compare to a penguin. When he flies, he unfolds his wings and shoots straight up with great speed, then levels out to go wherever he wants to go. He is rarely observed flapping his wings except for on take off. Witnesses often described his flight pattern as "Straight up, like a helicopter". He can fly much faster than any bird should be able to fly, as measured by those victims who suffered from what seems to be Mothman's favorite activity: chasing cars. He'll fly in front of them and even sometimes hit at the roof.

There has yet to be any credible physical or photograph evidence to truly support the existence of Mothman but there are a few photos that have been mistaken for Mothman such as a photo of a bridge taken in 2003 which turned out to just be a piece of metal tilting and falling off. There have also been some photo-shopped images mostly done for art purposes and not to fool anyone.

This image is not of Mothman, but of a metal structure on the top of the bridge tilting and falling off.

Photo-shopped Mothman image made only for art purposes.

Mothman sightings have been associated with at least two other cryptids. Gigantic Thunderbirds with gray bodies and red heads that were sighted in the same area at the same time by a few witnesses and Owlman which is an identical creature with wings and red eyes sighted in Cornwall, England in 1976.

Sheriff George Johnson, who the original witnesses contacted, believe the Mothman may have been a large heron. Wildlife biologist Dr. Robert L. Smith at West Virginia University thought that Mothman was a Sandhill Crane which the newspapers then reported on but the witnesses completely disagreed.

Skeptic Joe Nickell posited Owls as an explanation because of their eye shine and their silhouette resembling the headless Mothman. Most modern skeptics seem to agree with Joe Nickell but the sightings might just be too extraordinary to attribute them to such animals.

Two legends from Shawnee lore mention creatures closely resembling Mothman, deemed Misignwa and Waupee respectively. In the legend of Misgnwa, description of Mothman is indeed similar to Bigfoot by ceremonial dress used during the Bread Dance. The Waupee legend is also similar in that it's part of Shawnee lore, and that a family of Native Americans chose to become white hawks living in the forests near Point Pleasant.

Some believe the Mothman may be an angel, demon or the product of a blood curse placed upon the town by Chief Cornstalk, who was murdered along with his son in the area. Similarly, the curse theory is one very attached to the collapse of The Silver Bridge.

The more likely assumptions however, like a normal barn owl have been proposed, such as the fact the original sighting what they seem to describe is more in line with an illusion during driving, and other sightings could be misidentifications and calls for attention.

A speculative anurognathid pterosaur has also been a claim made by certain people, however it remains normal fun and speculative zoology.

The Mothman Festival is an annual commemoration of the visit of the cryptid known as the Mothman. It started in 2002 and is held on the third weekend of every September in Downtown Point Pleasant, West Virginia. Its located next to The Mothman Museum and The Mothman Statue.

The festival features a wide variety of vendors, guest speakers, live music, food and events for all-ages. People from all over the world come to experience the unique atmosphere and learn more about the Mothman. 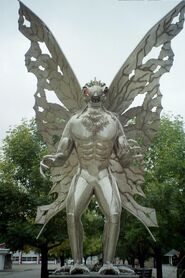 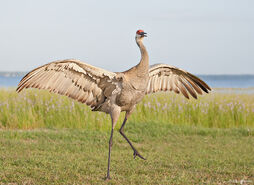 The Sandhill Crane, a suspect in the Mothman case 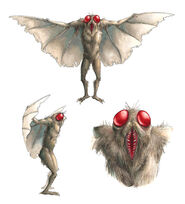 Illustration of the Mothman 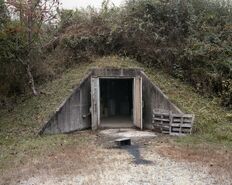 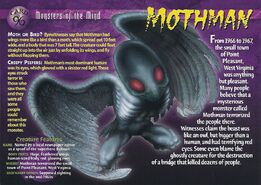 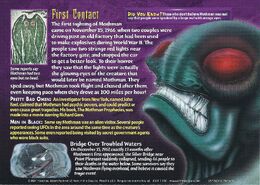 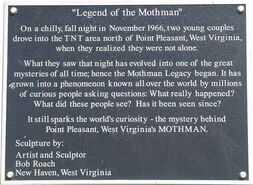 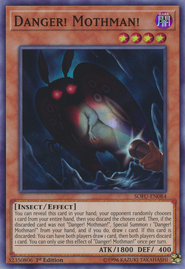 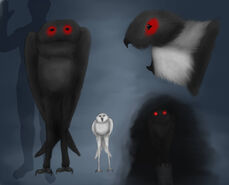 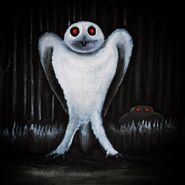 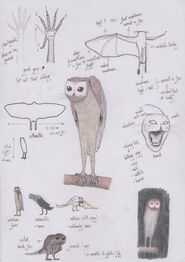 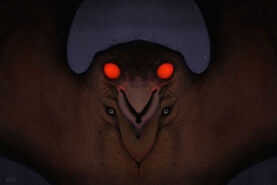 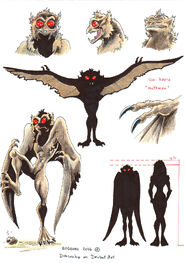 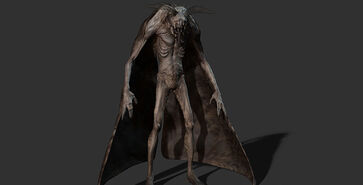 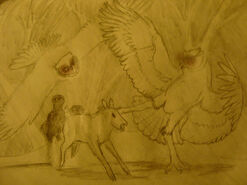 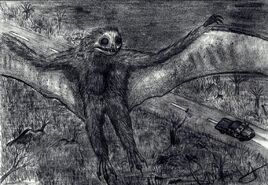 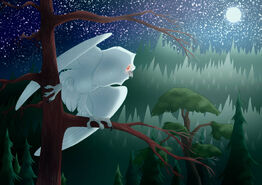 A drawing of Mothman as an owl. 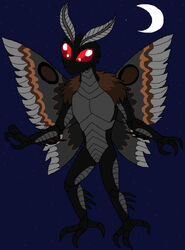 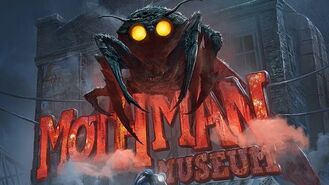 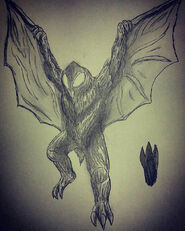 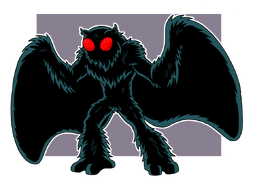 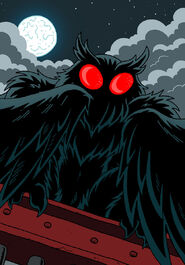 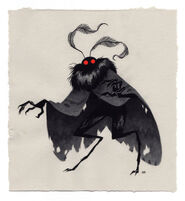 A drawing of the Mothman by Julian Callos 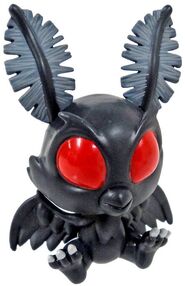 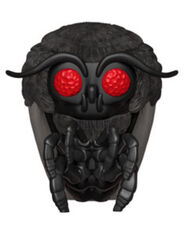 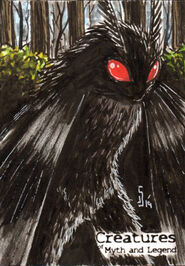 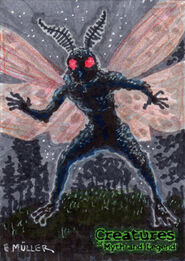 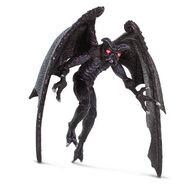 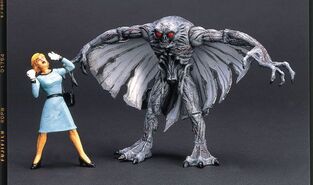 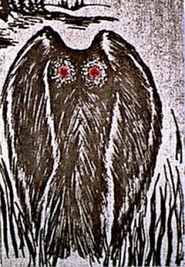 drawing of mothman from a local newspaper
Community content is available under CC-BY-SA unless otherwise noted.
Advertisement