Cryptid Wiki
Register
Don't have an account?
Sign In
Advertisement
in: No Modern Sightings, Feline, Mammals,
and 5 more

The Monuca is a wildcat-marten hybrid with curious fur coloring originating from Cantabrian mythology. According to legend, this animal is friendly and will bring luck to men who catch it, yet is highly aggresive towards women.

The monuca mostly resembles a marten with feline traits, it's most distinctive feature being it's white head, purple tail and a red, blue and black body; however, it is born colorless, and will only gain this coat later in life. 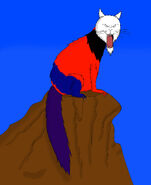 The monuca is rare, being born during spring once every 11 years from the cross of a male wildcat and a female marten, which will birth a single blind monuca kit in a cave. Still blind and as soon as it is capable of moving, the monuca will leave and wander the forest for days, returning to it's cave once it gains sight, only to blind and kill it's mother then leave again. Once the wildcat finds out, it will swear revenge and hunt down the monuca.

After this, it will nest near rivers, and hunt birds and bugs on meadows, mostly grasshoppers and turtledoves, and will sometimes suck the blood from lambs and children, gaining it's colored coat during this time. The monuca grows throughout most of it's life, usually becoming too big to run or climb trees around five years of age. Once it reaches this point, it will be easier for the wildcat to catch it, exacting revenge by blinding the monuca and leaving it to it's fate, either falling down some cliff or being preyed upon.

Going by myth, the monuca is extremely hard to find, as there is only a 5 year window once every 11 years, a cycle whose rythm is hard to determine, the only indications of it being around and active are sightings and reports of blood-sucking, this vampiric characteristic being shared by other mythical beings in the cantabrian region, such as the Guajona.

The monuca has an high aversion towards all females, and will outright attack and try to to claw out the eyes of any women who approach. Coupled with it's vampiric preying upon children and cattle, its behaviour is comparatively docile towards men, though still elusive. Purportedly, it's friendliness will show in full if caught and brought home, as it will grant men a life-time of good luck.