The Monster of Lake Fagua is a legendary creature documented in the Courier de L'Europe in France at 1784. This creature was said to live in Santa Fe, Peru.

This was dismissed as a hoax.

It is described as being 20 feet long, with the upper body and head of a human-like, bull-like horns, lion-like teeth, horse-like mane, bat-like wings, huge donkey-like ears, and the lower body of a two arms and dragon-like and donkeyand two long pointed tails which it used to sting and attack enemies. It also attacked using its rings or suckers to grab its prey.

It was said to emerge from the waters at night to terrify the local people and its diet consisted of livestock, such as cattle and pigs. 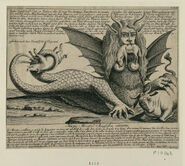 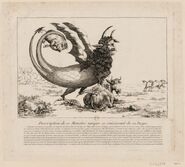