Start a Wiki
"Witnesses around the world report seeing monsters. Are they real or imaginary? Science searches for answers . . . On MonsterQuest"

MonsterQuest was an American television show which ran from 2007 to 2010 on the History channel.

Focusing on a different cryptid each episode, MonsterQuest eschewed the "reality TV" approach to its subject matter, leaning towards a more scientific method; the show frequently employed professional cryptozoologists, researchers and adventurers alongside eyewitness accounts to investigate its cases, and rather than bias its topic in favour of the creator's opinions, tended more to present the evidence and let the viewer make up their own mind.

Midway through it's fourth season, producer Doug Hajicek announced that MonsterQuest had been cancelled, not due to a dearth of viewers or subject material, but because the History Channel wished to move its programming in another direction.

Large cat from the Black Beast of Exmoor episode

Creature from the Devils in New Jersey episode

Creature from the Mothman episode

The Beast of Bladenboro from the Vampire Beast episode

Megalania from the Real Dragons episode

Giant swine from the Hogzilla episode 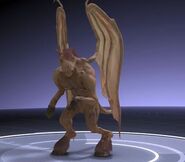 Another shot of the Jersey Devil

Another shot of the gigantic spider

Creature from the Flying Monsters episode

Enormous constrictor from the Giant Pythons in America episode

Another shot of the enormous constrictor

Creature from the Lake Monsters of the North episode

Thylacine from "Isle of the lost tiger" episode

Retrieved from "https://cryptidz.fandom.com/wiki/MonsterQuest?oldid=108528"
Community content is available under CC-BY-SA unless otherwise noted.