The Monkey Man of New Delhi was an ape like creature that terrorized the capital city of New Delhi, India in 2001.

In May of that year, stories began to circulate in New Delhi of a strange, nocturnal, monkey-like creature that was attacking people. Eyewitness accounts were often inconsistent, but tended to describe the creature as about four feet (120 cm) tall, covered in thick black hair. It supposedly wore a metal helmet, had metal claws, pants, glowing red eyes (sometimes beneath goggles) and three buttons on its chest. Some suggest the Monkey Man is an avatar of the Hindu deity Hanuman, while others claim it is a version of Bigfoot.

Many people reported being scratched, and two (by some reports, three) people even died when they leapt from the tops of buildings or fell down stairwells in a panic caused by the Monkey Man. Eventually, police even issued artist impressions in an attempt to catch the creature.

Shining a bright light in the Monkey Man's face was said to ward him off, as it renders his "night vision glasses" ineffective. It was also thought that throwing water on the simian's chest would short-circuit his "motherboard heart." In similar fashion, it was believed that the creature could turn invisible with the press of one button on his panel. These theories portray the Monkey Man as something more mechanical than natural.

The Monkey Man is believed today to be the product of mass hysteria.

On 13 May 2001, 15 people suffered injuries ranging from bruises to bites and scratches. On 15 May 2001, a pregnant woman fell down some stairs fleeing after neighbors shouted that they had seen the Monkey Man. A 4-foot-tall (1.2 m) wandering Hindu sadhu was beaten up by an angry mob who mistook him for the Monkey Man. On 18 May 2001, a van driver was set upon and sustained multiple fractures in another case of mistaken identification as Monkey Man. Further sightings were reported in Kanpur in February 2002 and New Delhi in July 2002, the latter describing a monkey-like machine that sparkled red and blue lights. One anonymous witness even claimed the Monkey Man had stolen his cell phone.

The appearance of Monkey Man in Old Delhi is the center-point of the 2009 Bollywood Hindi film Delhi-6 directed by Rakeysh Omprakash Mehra. In the film, the creature, called in Hindi as "Kala Bandar" ("black monkey") is used as an allegory to represent the evil that resides inside every man alongside God (virtue). 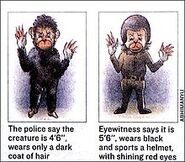