Cryptid Wiki
Register
Don't have an account?
Sign In
Advertisement
in: Cryptids, Asian cryptids, Dragons and Dragonoids,
and 5 more
English

The Mongolian Death Worm's native name, Olgoi-Khorkhoi, means "intestine worm", due to its red blood-like color, and size, which is the size of an intestine. It has been described by many to be from 2-7ft long, have the ability to spit out a corrosive yellow saliva and to generate blasts of electricity. However this latter power is thought of as being folkloric by the nomads of the Gobi. Western culture has come to call this monster the "Mongolian Death Worm."

Mongolian nomads believe the giant worm covers its prey with an acidic substance that turns everything a corroded yellow colour. Legend says that as the creature begins to attack it raises half its body out of the sand and starts to inflate until it explodes, releasing the lethal poison all over the unfortunate victim. The poison is so venomous that the prey dies instantly. Livestock and humans are supposed to be its main prey. Because Mongolia had been under Soviet control until 1990, very little was known about the Death Worm in the West. In recent years, investigators have been able to look for evidence of the creature’s existence. Ivan Mackerle, one of the leading Loch Ness Monster detectives, studied the region and interviewed many Mongolian people about the worm. Due to the sheer volume of sightings and strange deaths, he came to the conclusion that the Death Worm was more than just legend.

Nobody is entirely sure what the worm actually is. Experts are certain it is not a real worm because the Gobi Desert is too hot an area for annelids to survive. Some have suggested it might be a skink, but they have little legs and scaly skin whereas witness accounts specify the worm is limb-less and smooth bodied. The most probable explanation is that the deathworm is a new species of amphisbaenia or worm-lizard, a group of burrowing reptiles. Although the native Mongolian people are convinced of the Death Worm’s nature, it will take more years of research to satisfy the rest of the world’s scientific community.

In 2005 an expedition from the Centre for Fortean Zoology crossed a thousand miles of the Gobi on the track of the deathworm. They concluded it was probably a large, unknown type of worm lizard and that the powers attributed to it were apocryphal.

-The main antagonists in the Tremors series called Graboids, were based upon the Death Worm.

- The Death Worm did make an appearance on Lost Tapes, where a pack of Death Worms attack a couple of ATV riders who are stranded in the Mongolian Desert.

-In 2010, the Syfy original movie Mongolian Death Worm, the worms are seen as gigantic slug like creatures with extendable jaws and able to climb walls. The worms in this movie don't have the ability to shock or spit acid, unlike the traditional legend says.

-In the popular game ARK: Survival Evolved, as a part of their Scorched Earth DLC, they added the Death Worm as a huge worm taller than a T-Rex,with leg like appendages by the mouth and is able to only bite and claw.

Account of 2005 expedition to look for the Mongolian Deathworm 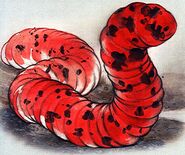 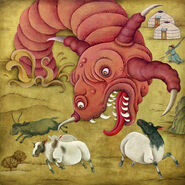 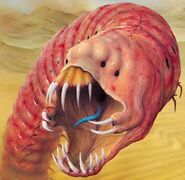 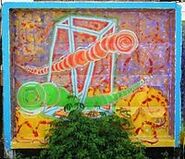 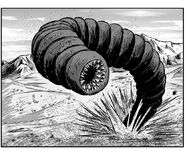 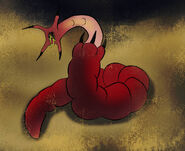 The Mongolian death worm (depicted with bristly quills, electric tail, hardened beak-like mandibles and three eyes on each side of the head))

a snake
Español
Community content is available under CC-BY-SA unless otherwise noted.
Advertisement