Cryptid Wiki
Register
Don't have an account?
Sign In
Advertisement
in: No Modern Sightings, Plantae, Cryptids,
and 8 more

Moly (Greek: μῶλυ, moly) is a magical herb mentioned in book 10 of Homer's Odyssey. In the story, Hermes gave this herb to Odysseus to protect him from Circe's magic, when he went to her home to rescue his friends.

These friends came together with him from the island Aiolos after they escaped from the Cyclops. "The plant 'moly' of which Homer speaks- it is said- had grown from the blood of the Gigante killed in the isle of Kirke; it has a white flower; the ally of Kirke who killed the Gigante was Helios (the Sun); the combat was hard (Greek malos) from which came the name of this plant". Homer also describes Moly by saying "The root was black, while the flower was as white as milk; the gods call it Moly, dangerous for a mortal man to pluck from the soil, but not for the deathless gods. All lies within their power".

There has been much controversy as to the identification. Philippe Champault decides in favour of the peganum harmalum (of the order Rutaceae), the Syrian or African rue (Greek πἠγανον),

from the husks of which the vegetable alkaloid harmaline is extracted. The flowers are white with green stripes. Victor Bérard relying partly on a Semitic root,  prefers the atriplex hamilus (atriplex, a Latin form of Greek ἀτράφαξυς, and ἅλιμος, marine), order Chenopodiaceae, a herb or low shrub common on the south European coasts.

These identifications are noticed by R. M. Henry, who illustrates the Homeric account by passages in the Paris and Leiden magical papyri, and argues that Moly is most likely a magical name, derived perhaps from Phoenician or Egyptian sources, for a plant which cannot be certainly identified. He shows that the "difficulty of pulling up" the plant is not a merely physical one, but rather connected with the peculiar powers claimed by magicians. In Tennyson's The Lotos-Eaters, the Moly is coupled with the amaranth ("prompt on beds of amaranth and Moly").

Amaranth, yet another possible candidate 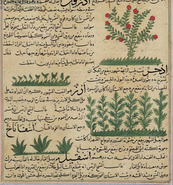 A collection of mysterious plants from the Book of Jinn
Community content is available under CC-BY-SA unless otherwise noted.
Advertisement