Cryptid Wiki
Register
Don't have an account?
Sign In
Advertisement
in: Cryptids, Dinosaurs and Pterosaurs, Congo,
and 18 more

The Mokèlé-mbèmbé, which means "the one who stops the flow of rivers" in the Lingala language, is a dinosaur-like cryptid that lives in the Congo. It is said to look like a sauropod, or a long-necked dinosaur, such as Apatosaurus or Diplodocus. The Mokèlé-mbèmbé was the focus of the children's book Cryptid Hunters by Roland Smith. There have been many sightings in the Congo and Cameroon. Its meat is apparently poisonous, as a group of villagers once killed one and everybody who ate the meat died shortly afterwards. Besides the Sasquatch, Loch Ness Monster, and Mothman, this is one of the most well-known cryptids.

Mokèlé-mbèmbé means "One that stops the flow of rivers." A French priest in the region called it "monstrous animal". Mokèlé-mbèmbé is also used as a generic term to refer to other animals like Emela-ntouka, Mbielu-mbielu-mbielu, and Nguma-monene. Mokele-mbembe has been described as an animal with a long neck and tail which are characteristics of a sauropod dinosaur.

The color of the skin is predominately reddish-brown with a color range from gray to brown. There are no reports of hair on the animal.

The tracks rounded in shape between 30 to 90 centimeters (1 to 3 feet) in diameter with three claws. The distance between tracks is about 2.1 to 2.4 meters (7 to 8 feet). The basic belief is that Mokèlé-mbèmbé does not make any sounds though there have been come conflicting reports. This is probably due to the fact that Mokèlé-mbèmbé is used generically for other animals and the sound is being confused with Emela-ntouka which makes a sound like a snort, howl, roar, rumble, or growl. Mokèlé-mbèmbé lives in the pools and swamps adjacent to the rivers of the Likouala swamp region of The People's Republic of the Congo on the continent of Africa. It uses the lakes as a crossing path to go from one river to another river.

A West African carving of a strange animal, currently housed at Glencomeragh House in County Tipperary in Ireland, is believed by some cryptozoologists to represent the Mokèlé-mbèmbé. It depicts a scaly animal with a long neck, a small head, cloven feet, a long tail, and a finned structure below its tale. It is alongside a smaller animal with similar features but no neck, and its relationship with the smaller animal is unclear. Although it has been suggested that the carving may be a modern creation, it has apparently been at Glencomeragh House since at least the 1950's, decades before western interest in the Mokèlé-mbèmbé.

Mokèlé-mbèmbé was featured as a Kaiju in Godzilla: King of the Monsters, though only it's silhouette and name were shown.

The pygmies of the Likouala swamp region report that the essential diet of Mokèlé-mbèmbé consists of the Malombo plant. Since it only eats plants then Mokèlé-mbèmbé is classified as a herbivore. The Malombo plant actually describes two plants: Landolphia mannii and Landolphia owariensis. Mokèlé-mbèmbé lives most of the time underwater except when it eats or travels to another part of the swamp. It has as been reported that Mokèlé-mbèmbé does not like hippopotamuses and will kill them on sight, but it does not eat them. Hippopotamuses cannot be found where Mokèlé-mbèmbé lives. It has as been reported that Mokèlé-mbèmbé will overturn boats and kill the people from the boats by biting them and hitting them with its tail, but it does not eat the people. If this was a living sauropod most scientists and paleontologists doubt it would become hostile or carnivorous due to the fact that there are over 1,000 kinds of plants in the Congo.

Scientists usually agree that the creature is a hoax, but others believe it could be a species of bird or other animal. The evidence for its hoax tends to be the fossil record not showing the survival of sauropods past the Kpg. A counter is that the coelacanth was found even though it was thought to be extinct since the Kpg. This can fall apart due to the fact the coelacanth was a deep water fish and fish fossils don't preserve as well as dinosaurs fossils which should preserve better. The fact coelacanth fossils have been found in Israel (although this one could be propaganda by a Muslim creationist) and Sweden after the Kpg is further evidence skeptics tend to use like Zoologist Darren Naish. The other evidence such as footprints tend to show up as faulty as they can have the wrong number of toes. The fact that a new algae which was discovered in a trip to find the supposed living dinosaur and the red Clovis monkey thought to be extinct in the Congo for years can also be used as a talking point saying that "If they can be discovered than why can't a 32 foot dinosaur?" This has not stopped people looking for the animal.[1][2][3][4][5][6][7][8]

Some believe the creature could be a giant lizard with a long neck, a rhino, an elephant, or even a large pangolin.

Baby: Secret of the Lost Legend is a 1985 American adventure fantasy film directed by Bill L. Norton and starring William Katt, Sean Young, Patrick McGoohan, and Julian Fellowes. The film follows paleontologist Susan Matthews-Loomis and her husband George, who stumble upon Brontosaurus on an expedition in Central Africa while trying to track down a local monster. The two are pursued by the African military in an attempt to protect a baby dino and its parents.

Produced by Walt Disney Studios and released on its Touchstone Films label, it was first released on March 22, 1985. A recut version aired on American television in 1989 under the title Dinosaur...Secret of the Lost Legend as part of the Wonderful World of Disney.

The Mokèlé-mbèmbé made an appearance in the 2012 adventure movie The Dinosaur Project, though it had a more Pleiosaur-like appearance rather than the traditional sauropod appearance.

-In the movie Godzilla: King of the Monsters, there is a Titan located in Jebel Barkal, Sudan named after the Mokèlé-mbèmbé. 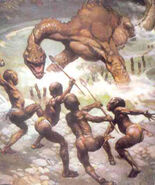 The size of the mokele-mbembe and the human

The first drawing of the creature

If this isn't a living dinosaur

In the Secret Saturdays

A supposed photo of the creature

Mokèlé-mbèmbé as it appears in Godzilla: King of the Monsters, although obscured by fog

Brontosaurs could be the ancestors of the mokele mbembe

A still from a supposed video