Moehau also known as Maero, Matau, Tuuhourangi, Taongina or Rapuwai described by the Maori people of New Zealand as being "Terrible creatures, half man, half animal", with a very aggressive temperament, they were only too happy to massacre and eat anyone that strayed into their domain.

Early encounters often talk of these creatures exhibiting aggression and throwing rocks to frighten people off. It was these creatures, largely found in the Coromandel Ranges, that were thought to be responsible for the find of a headless, partially devoured body of a prospector in the Martha Mine region in 1882, later further up in the foothills the corpse of a woman was found, it was discovered she had been dragged from the shack in which she lived while the remainder of her family were away, and her neck had been snapped.

On the topic of aggressive behavior, Taonginas were greatly feared by the population of the lower Wanganui River as they were said to viciously attack any fishermen who strayed into their territory. This vicious behavior however seems to have abated in more modern encounters as the beasts in most instances flee on sight of  humans.

Rapuwai are believed, from legend, to be able to crush any strong Maori warrior with ease employing their large powerful hands. They are said to be tool-producing beasts using wood and stone, the articles crafted are said to resemble those produced by Homo erectus hominids. The Rapuwai are mostly believed to be an evolved orangutan that fled to these uninhabited islands of Polynesia. Meanwhile the Moehau are depicted as being as tall as a man, completely hair covered, with marginally ape-like facial features. The primary difference from human appearance being the extremely long fingers, tipped with sharp talons, capable of tearing apart the toughest prey. Often described as “Manimals”. It is possible that if these man-beasts existed prehistorically they would have been more than capable of bringing down the largest of Moa - Dinornis. The large talons spoken of seem to designate this creature's predatory nature. However, large talons are also found elsewhere in the animal kingdom in animals that rip open rotten logs to acquire nourishment, considering the indigenous Maori used to eat the large nutritious Huhu Grubs; it is not impossible that this beast may also be insectivorous. Matau Giants are described as being ape like but 3m tall. The Rapuwai are gigantic, slow clumsy creatures that are of a strong muscular stature.

These creatures can be categorized as follows, those that are the stature of an ordinary human, the Moehau and Maero and those that are of giant stature the Matau, Tuuhourangi, Matau Giants and the Rapuwai.Many areas of New Zealand are named for these great hairy man beasts, Moehau Mountain, where they are believed to reside and people are cautioned against going up there is one such place. The Moehau are thought to populate both Mount Tongariro and Ruapehu, the Karangahake Gorge, Coromandel Ranges, Martha Mine Region, Waikaremoana – in the Urewera Ranges, The Heaphy River of the Northwest Nelson State Forest Park, Kaikoura Mountains, Fiordland National Park and are believed to be very common in the Haasts Pass area particularly around the Haast River.

The Matau Giants inhabit Lake Wakatipu in Central Otago. Toanginas are found in the lower reaches of the Waikato River. Maero are encountered in bush country throughout both the North and South Islands. Rapuwai are said to inhabit the Marlborough Distract and the Milford Sounds area. There is further another as yet unidentified type of man beast that lives in the Cameron Mountains in the South West of the South Island.

It is possible that some of these man-beasts may still exist in the more remote isolated areas of bush throughout both Islands. With habitat destruction and human encroachment this species, if it survives, must unquestionably be on the brink of extinction or maybe already extinct. It appears the last bastion of the Moehau is in the Coromandel Ranges, where accounts seem to indicate they resided in their greatest population density.

Footprints are in most instances the main evidence of these creatures, in 1903 footprints larger than a mans were found in the Karangahake Gorge in Coromandel. In 1971 a trail of footprints similar to a mans though extended in appearance was located on snow-covered ground and led into a zone of bush on a hillside by a Park Ranger. 1983 was when a deer hunter chanced upon man-like footprints that could have been no more than an hour old along a riverbank in the Heaphy River area. In 1991 campers in the Cameron Mountains of the South Island elected to abandon their camp after finding unusually large man-beast prints near where they were camping.

In 1970 another party of campers had to abandon their camp as a 2m tall man beast assailed them screaming loudly and hurling rocks at the camp.

1972 and a hunter in the Coromandel ranges watched a naked, hairy man beast about 2m tall work its way through the scrub on the other side of a gully, upon reaching the place the creature had been traversing, footprints were found.

An undated sighting surfaced from the Sunday News stating that an occupier of the Lake Mahinapua Pub had been having his vegetable garden raided regularly, the offender was exposed when a man beast was witnessed dashing to the protection of the bush with an arm load of Silverbeet. Regrettably some of the Coromandel sightings may have been of an escaped Gorilla. A vessel anchored near Wai Aro in 1924 had a pet Gorilla as a mascot, the animal managed to slip away from the ship and was never captured, however sightings of the beast provoked a few startled reports from the region. 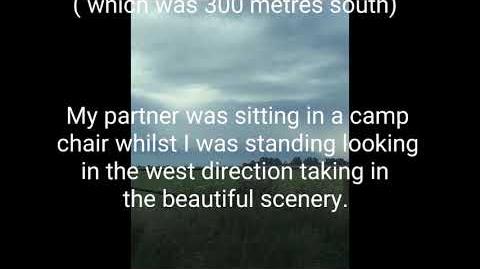 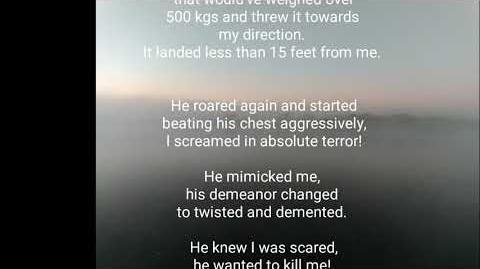