The moa (Dinorniformes) were giant flightless birds native to New Zealand. They were comprised of 9 species in 6 genera, ranging from the size of turkeys to nearly double the human height. The largest was the south island giant moa, which could grow to a height of about 3.6 meters (about 11ft) and weigh up to 250 kg (about 770lb).

They belonged to a group of birds called ratites, which also includes ostriches, emus and kiwi. Genetic studies suggest that the closest living relative of the moa are the flighted tinamous of South America, once considered to be a sister taxa to ratites.

They were the largest land animals in New Zealand, being found in forests, shrubland and subalpine habitats. The moa's main predator was the Haast's eagle, the biggest eagle to have ever existed. Both became extinct alongside the moa soon after humans arrived 700 years ago. Their main cause of extinction was by the Maori, who exploited the abundance of moa, along with the mammalian predators they brought with them causing them to go extinct within a hundred years of their arrival. The moa was forgotten until European arrival when the remains of the moa were found.

It is believed that early ancestors of these birds could fly, reaching New Zealand around 60 million years ago. They soon became flightless due to the lack of predators, losing their wings completely. For millions of years they lived in isolation, with only the Haast's eagle being their main predator. Moa are believed to have became extinct soon after humans landed. Overhunting, habitat destruction and the introduction of mammalian predators by the Maori was the most likely reason for their demise.

Modern science tells us the moa went extinct more than 500 years ago, soon after the settlement of New Zealand, however sightings of the moa have been numerous throughout the years, occurring most commonly in the remote parts of New Zealand. It has been speculated that the smallest species of moa could have survived in the remote and dense forests of Fiordland and the west coast until fairly recently, as these areas were virtually undisturbed until European arrival. Most sightings of the moa occurred in the colonial era when surveyors and prospectors started exploring the remote New Zealand wilderness.

In the 1820s George Pauley claimed to have seen a bird ''20 foot high'' by an unnamed lake in the Otago region of southern South Island. Pauley ran away from the bird.

Walter Buller wrote that the Maoris claimed a large kiwi lived in the Chatham Islands until about 1835.

In the 1840s, Australian bird painter John Gould reported seeing what he described as "giant kiwis" on the South Island of New Zealand, that were around a meter tall and had spurred feet. Gould's spurred feet description had matched those of fossilized Moa footprints found on the North Island.

At about 1844, the crew of the whaler Magnolia reported trapping a "big emu" weighing about 227kg. The captain who was a taxidermist was said to have preserved the bird to send it to the "London Museum" however no known specimen was ever sent to the museum.

In april 1850 a seal-hunter found moa bones with flesh still attached at molyneux harbour, on the south island.

In January 1861, fresh-looking, three-toed prints about 14 inches long were found in the mountains between Takaka and Riwaka in northern South Island by members of a surveying party.

In 1867, 4 gold miners claimed to have seen a moa. “On Saturday, July 27, about four o’clock in the afternoon, whilst enjoying a pipe by the side of a small fire in our hut, with the door open, my attention was suddenly directed to a large animal on the opposite range, I was not long in doubt as to what the stranger was. My mates cried out, ‘It’s the moa’ and the moa sure it was. The bird must have been more than a mile in a straight line from us; but as the horizon was clear every movement could be detected. The bird was evidently going at a great pace, and I can only compare it to the movements of the emu or ostrich. We had a full view of the bird for more than two minutes, when he suddenly disappeared on the other side of the range.”

In 1868, Sir George Grey received a circumstantial account of a recent killing of a small moa which had been captured from a drove of six or seven birds by a party of Maoris at Preservation Inlet in Fiordland.

In 1878, several people reported seeing a silver-gray bird larger than an emu on a station near Waiau, South Island. In one instance, a sheepherder's dog flushed the bird from a patch of scrub and chased it for about 40 yards before it turned and chased the dog. The moa stood for ten minutes watching them, bending its long neck up and down like a swan.

In 1880, 8 year old Alice Mackenzie claimed to have seen and touched a moa at Martins Bay in Fiordland. She described the bird as "A fairly tall bird with bright blue plumage", she, her father and brother saw the bird many times.

In 1896, some schoolboys saw a moalike bird cross a road in the Brunner Range, South Island.

In about 1928, Jules berg and Arawata Bill were heading to Milford from Preservation Inlet, one night near lake widgeon, Jules was woken by what sounded like deer drinking from a nearby stream, it seemed like a good opportunity to shoot some deer so he took his rifle and torch and set off. When he was ready to shoot he turned on his torch, which revealed 3 objects like giant fowls standing about a meter tall, for a moment bill was stupefied and in that instant the birds fled.

In 1963, a scientist saw a large, moalike bird in the brush in the North-West Nelson State Forest Park, South Island.

In May 1991, hiker Jim Straton saw an enormous, dark-colored bird cross a hiking trail in front of him along the Waimakariri River. He estimated its height at 11 feet.

In 1993, three hikers claimed to have seen a moa in the Craigieburn Range in Arthurs Pass. One of them, a former SAS soldier and mountaineer Paddy Freaney had managed to chase the bird and take a photograph of what appeared to be a fleeing moa. Later analysis by specialists at the Canterbury university concluded that the picture seemed to show a genuine bird. A year later in the same vicinity, a physician found unusual browsing damage on plants that could only have been made by a moa.

In 2007, a hiker claimed to have seen a moa in Fiordland and had managed to take pictures of the bird and its footprints, the pictures were sold in an auction and have not been released.

During February and March 1978, a Japanese research team, led by biologist Prof. Shoichi Hollie of Japan’s Gunma University, headed to Fiordland to see if any moas were still living in the area. Using a reconstructed moa cry on tape, created with the help of computerized analyses of the Megalapteryx throat structure using fossil remains, failed to receive any reply. It has been suggested that the people reporting have seen Moas were exaggerating or seeing large individuals of known birds, such as cassowaries or emu. However this does not explain the large number of sightings, with many having consistent descriptions that do not resemble any known bird alive. In the 1960s a government naturalist reported that he had seen definite, concrete, fresh evidence of the continued existence of a small species of moa during his trip, this person has remained anonymous and has never come forward with his claim. So far no physical evidence has been found, but the conditions of their supposed habitat would mean that any remaining evidence would quickly disappear. In all the moa is one of the most likely cryptids to still exist, with sightings continuing to this day. 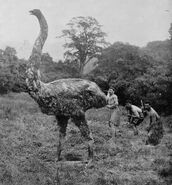 A 20th-century reconstruction of a moa hunt.

A human skeleton next to a giant moa.

A size chart of the 9 moa species

A painting of Moa being hunted by the Haast's Eagle, an extinct species of giant raptorial bird native to new zealand.

A painting of giant moa 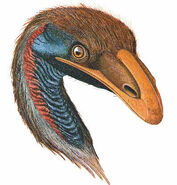 A painting of the head of a Moa.