Cryptid Wiki
Register
Don't have an account?
Sign In
Advertisement
in: Cryptids, Cryptid Wiki, North America (Minus Mexico and Caribbean),
and 19 more

The Michigan Dogman is a werewolf or werewolf type creature first reported in 1887 in Wexford County, Michigan. Sightings have been reported in several locations throughout Michigan, primarily in the northwestern quadrant of the Lower Peninsula. In 1987, the legend of the Michigan Dogman gained popularity when a disc jockey at WTCM-FM recorded a song about the creature and its reported sightings.

Cook recorded the song with a keyboard backing and credited it to Bob Farley. After he played the song, Cook received calls from listeners who said that they had encountered a similar creature. In the next weeks after Cook first played the song, it was the most-requested song on the station. He also sold cassettes of the songs for four dollars, and donated proceeds from the single to an animal shelter. Over the years, Cook has received more than 100 reports of the creature's existence. Cook later added verses to the song in 1997 after hearing a report of an animal break-in by an unknown canine at a cabin in Luther, Michigan. He re-recorded it again in 2007, with a Mandolin backing.

The first known sighting of the Michigan Dogman occurred in 1887 in Wexford County, when two lumberjacks saw a creature whom they described as having a man's body and a dog's head.

In 1938 in Paris, Michigan, Robert Fortney was attacked by five wild dogs and said that one of the five walked on two legs. Reports of similar creatures also came from Allegan County in the 1950s, and in Manistee and Cross Village in 1967.

In 1961, a night watchman was patrolling a manufacturing plant in Big Rapids, Michigan when he saw a peculiar figure. At first he thought it was a person until he saw the doglike features. He pulled his gun and was about to shoot when he remembered his camera and took it out and took a picture of the horrific beast. The photos have not been analyzed yet, and the photo still remains an unsolved mystery.

In 1987, disc jockey Steve Cook at WTCM-FM in Traverse City, Michigan recorded a song titled "The Legend", which he initially played as an April Fools Day joke. However, he based the songs on actual reports of the creature.

A frame from hoaxed footage of the Dogman 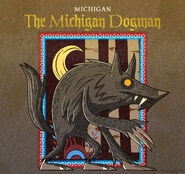 Legend of the Michigan Dogman 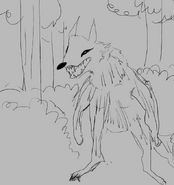