Cryptid Wiki
Register
Don't have an account?
Sign In
Advertisement
in: Humanoids, Aliens, North America (Minus Mexico and Caribbean),
and 7 more

In Falkville, Alabama, on October 17,1973; a spaceship was spotted out on a field. When the authorities got involved, the chief Jeff Greenhaw didn't see a space ship, but instead something he would later regret seeing: an alien.

The "tinfoil" alien was clad in a suit fabricated from or similar to thick aluminum foil, intensely bright and "as smooth as glass." Its movements were childlike, or even monkey-like, but at the same time very robotic and mechanical. There appeared to be no separation between the neck and head, which bore an antenna.

It ran at speeds that, according to Greenshaw, far exceeded that of any human he'd ever seen. It seemed to have a literal spring in its step, covering three meters every way.

Although he was off-duty at the time, Greenhaw abiding by his sworn duty to serve and protect jumped up, snagged his keys, handcuffs, revolver and, almost as an afterthought, his trusty Polaroid camera on the off chance that there might be something worth taking a shot of. He then hopped in his truck, radioed the call in and flew to the location of the alleged flying saucer landing.

As soon as he got there there was no spaceship to be found, but something else. As he got back to the car and traveled a few yards from where the spaceship was, he saw an entity that looked almost human-like so he approached with caution. He shouted and it didn't respond. As he got closer he could see that what it was wearing looked almost like shiny tin foil all around the body. What was wrong about this was that the things movements were jerky and it seemed to be very childlike. He decided to run back and get his camera and shot four pictures of the thing before it went off.

As he started the engine and put on the headlights to get a better picture, it bolted and it was faster than any human or anything he saw before. He tried to follow it in his truck, but even at 35 MPH he was no match for the incredibly fast entity. Shortly after, he hit a bump and went into a ditch. After that, he never saw it again.

Even though he had a reporter come to him and his statements were on television for a short while, he suffered a terrible aftermath: Within months of revealing his bizarre encounter, the Chief of Police was terminated by the town council, his marriage fell apart, and just when it must have seemed as if matters couldn’t get any worse his home was burned to the ground.

All of the above factors have thrown kerosene on the already brightly burning flames of the UFO conspiracy theories surrounding this event and, more to the point, give a clear indication as to why most contacts and eyewitnesses remain silent regarding their unusual experience. The pictures were brought to an analyst and were not concluded as to being a hoax or real - in fact they believed that it was a fabrication of the Pascagoula case. Though what was interesting about the picture is that in the negatives you could see a "spaceship".

It's very hard to say if this is a hoax or not: To this day Greenhaw has more supporters then ever before and they believe that he did, in fact, encounter an alien, although Greenhaw still regrets ever seeing the "alien". One thing's for sure: it is one of the most popular alien encounter stories ever documented and has been used in literature and television.

To this day, it's an unconfirmed hoax.

Cryptonaut Podcast about the creature 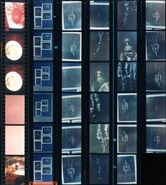 A book about the sighting

one of the four photos