Charcharocles Megalodon (considered alternatively to be Otodus Megalodon) is a giant shark similar to a Great White shark due to the fact they lived the same life style, but they were not related. Living from 15.9 to 2.6 million years ago, during the Cenozoic Era, this shark is now known only from teeth. Because of this shortage of data, estimates vary regarding its likely size, though it is universally agreed that Megalodons could reach lengths of an excess of 50 ft to 54ft (however 60ft has been considered) Megalodon, meaning "big tooth", had teeth at least 7 inches long and had a mouth that could expand to engulf an elephant whole. Although widely regarded to have gone extinct in the late Pliocene, some believe that they may survive to the present.

Although no solid evidence indicates continued existence, there have purported sightings in modern times. In 1875, two megalodon teeth were brought up during a deep-sea exploration by the HMS Challenger that supposedly were only 10,000 to 14,000 years old. During this time, a land bridge between North America and Asia existed and the ancestors of the Native Americans were crossing over. If tests on the age of the huge teeth were accurate, this means that megalodon was still alive at the end of the Pleistocene, over two million years after it's generally agreed date of extinction. Although these teeth were confirmed to have been looking fresh due to Manganese dioxide, so these teeth may not prove anything.

Another recorded sighting was documented in 1918. Supposedly, a fisherman off the coast of Australia refused to return to the ocean after a massive shark demolished their gear and stole their crayfish pots. When further questioned, they all reported similar things, a ghostly white shark as long as the wharf they were standing on-115 feet. Proponents of the modern persistence of megalodon argue that these people, experienced fishermen, would have recognized a whale had they seen one. The creature frightened the fishermen so much that they refused to work.

Another sighting occurred In the 1960's. The captain of a 26-meter fishing boat reported seeing a huge shark. Like the fisherman in Australia, he and his crew were very experienced, so it is argued that they would've known if it was a whale or not. The crew refused to say what they saw to reporters. However, the captain gave his account a few years later.

Multiple videos and pohotgraphs of Megalodon have made it to Youtube and the news, but most end up being hoaxes or misidentified Basking Sharks.

While there's a possibility there are living Megalodons, most evidence is either fake or misidentified Great Whites, or Basking Sharks. The other evidence like a 10000 year old tooth are very unreliable as they were coated in hard amounts of minerals that could mess with the dating of the specimens. The extinction date for the species was recently set back by a million years.

The Megalodon has been in a lot of movies and documentaries, which makes it known for being the biggest shark to ever exist.

Since 2010, SYFY's Megashark Vs series has featured the Megalodon as the main villain against another massive creature such as Crocosaurus, Mechashark, Giant Octopus and even a gigantic robotic-Titan-like machine known as Kolossus. Even though most of the things about the Megalodon in this series is blown out of proportion including it's size or the ability to throw ships across continents with one try; it is a decent representation of the Megalodon.

In EA's Battlefield 4, if 12 players (either team) stay by a certain buoy for a short enough time on the map "Paracel Storm" , a gigantic Megalodon will jump out of the water and will kill players and vehicles within the path of the shark.

In EA's later installment of the Battlefield series titled Battlefield 1, If a group of players follows a certain list of steps on the map Fort De Vaux, a certain puddle on the map will turn red and soon a mini Megalodon will jump out killing all players within the puddle before it goes back under the puddle.

This Year, there will be a movie based on the book MEG by Steve Alten, called The Meg which will be about a deep sea submersible crew who get trapped at the bottom of the ocean after the 75 foot Megalodon attacks their submersible and goes on a rampage in the ocean and it's coasts. The Asylum productions are making a mock-buster of this film, with the same plot called Megalodon. 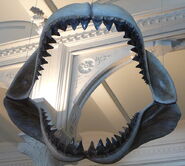 A photo, likely hoaxed, showing a megalodon of about 90ft long next to a U-boat. Disputed on the fact that there in no wake coming off the fins, and that the Nazis did not watermark images with a swastika.

A shark supposedly of similar size to megalodon. 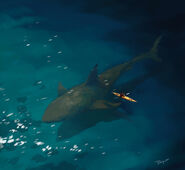 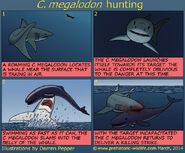 A reconstruction of a megalodon, alive in the modern day.

The Megalodon from Jurassic World: The Game

Poster for the Horror/Action movie The Meg 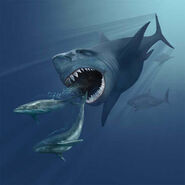