The Marozi or spotted lion is a feline cryptid from the mountainous region of Eastern Africa.

Kenya's Aberdares Mountains are believed by local hunters as well as some western naturalists to harbor small, spotted, mainless lions that have managed to retain their juvenile spots throughout their lives instead of losing them when mature. Skins of the marozi have occasionally been obtained. One pair of skins- a male and female- received attention and interest from carnivore specialist Reginald Pocock at London's Natural History museum, where they are still preserved.

Some sources state that the marozi is a lion/hyena crossbreed, but this very unlikely as lions and hyenas have very different genetic make-ups and are natural rivals. Sceptics would often dismiss it as being freak specimens of the normal lion, however its interesting to note that they have only been reported from shady mountainous area, where their mottled coat, smaller body size, and absence of a mane in male lions would all be traits for a female predator here, aiding camouflage and movements in this particular terrain. Perhaps the lion has evolved a distinct montane version, specifically adapted to this habitat instead of the lion's typical savannah home. It is most likely that marozi sightings are hoaxes, but the existence of skins and skulls disprove this theory. Another theory is that they are lions with a genetic mutation that causes them not to lose their spots. Genetic mutations are rare in the wild, but they do happen.

Another theory is that the marozi is a new species and/or subspecies of big cat. The marozi will hopefully be added to the former cryptids list soon enough.

A colored version of the painting 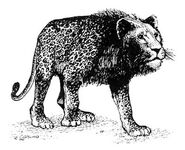