According to Brazilian stories, the Mapinguari or Mapinguary was once an Amazonian shaman who discovered the key to immortality thousands of years ago. He angered the gods and was severely punished as to his discovery, which forced him to be transformed into a wandering beast for the rest of his life.

Due to application of the name to what seem to be different cryptids, modern sightings show the beast as a giant sloth, whereas older sightings described it as an ape-like creature. Many cryptozoologists speculate that the Mapinguari is either a mylodontid or a megalonychid, medium-sized giant ground sloths from the Ice Age that lived in the area. The creature also supposedly has a horrid odor, which supposedly can knock a man unconcious. It is said to sometimes be a humanoid creature with a mouth in the middle of its stomach. It is sometimes said to have one eye, long claws, caiman skin, backward feet and a second mouth on its belly. Some samples of Mapinguari "hair" and "droppings" were collected by investigator David Oren, but turned out to be the deposits of giant anteaters and the hair of small rodents.

The Mapinguari is featured on the show Beast Hunters. As said in the episode it is also commonly featured in Brazilian culture. This creature is also hunted in the show Monsters Underground, which is on Destination America. Bill Brock and his team head to Graveyard Gulch, located in Northern California, and investigate the reason for recent unexplained black bear deaths. In season 2 episode 5 of Destination Truth the team searches for the Mapinguari in the Amazonian rain-forest. 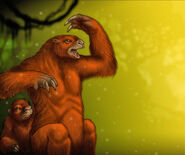 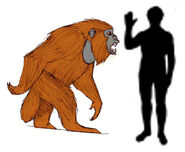 If wasn’t a Giant Sloth, might be a primate

Mapinguari
Add a photo to this gallery

Retrieved from "https://cryptidz.fandom.com/wiki/Mapinguari?oldid=103584"
Community content is available under CC-BY-SA unless otherwise noted.