Mantis Man is a roughly 7 foot tall bug-like creature that has been reported in Hackettstown, New Jersey, near the Musconetcong river. This cryptid mostly resembles a "Praying Mantis" (which is why it's called Mantis Man), and is unlikely to be related to the Mantodea order.

The odd thing about the two sightings that were present is the fact that both men were out fishing and saw it near a body of water. Praying Mantis don't usually spend their times in water; they usually spend their times on leaves and in the forest, though, mantis may be able to swim in shallow water. With its huge size, it can touch the bottom of the river without it's whole body drifting away through the current.In all of the reports, the Mantis Man doesn't harm anyone, it's likely afraid of the people who encounter it because it seems to always run away when they get close to it.

Unlike the two on Monsters and Mysteries in America, there was, in fact, another sighting of the Mantis Man. The police report tells that another person "Mr. Strickler" saw the Mantis Man in a river bank:

"I saw something strange a few weeks ago on the M'cong River near my home here in Hackettstown, New Jersey. I was driving home from the drug store on Newburgh Rd. As I drove near the bridge over the river, I noticed to my left something (I thought a fisherman) standing in the river just off the south bank. I slowed the car and looked closer. It wasn't a person and it was transparent-like with a weird shape. It moved slowly towards the bank and into the trees. I drove further so I could see it coming out of the trees. That's the last I saw of it.

It was tall, 8 ft. or so and had long thin arms hanging off of it. The color was a pale brown, but I could see through it! The head was small compared to the body.

It was sunny that day so I thought it may be glare from the water, but after I thought back I realized I wasn't seeing a mirage or glare.

I checked the internet and didn't see anything about it.

I mentioned it to a co-worker in my office at lunch on Wednesday. He gave me the strangest look. I thought 'uh-oh' he thinks I'm nuts. We went back to his computer and he brought up the Hackettstown forum with the mantis man witness."

People claim that the Mantis Man may have been an experiment gone wrong, and someone who couldn't control it just set it free near a river. It could have been a mutation in a breeding situation, unlike it being short it would have been massive. Some people speculate that there are more then just one of these mantis roaming around. The reason why most people think it's a giant mantis instead of being something else, is because it looks and does things like a mantis: Camouflage, spreading its wings, the mouth, etc.

Now, while most people think it might just be a large praying mantis, other people suggest that it might be an alien. Possibly, some Aliens may look like insects in some way.

Like all things, however, there is a reasonably high chance that this is a hoax.

The Mantis Man has been featured on Monsters and Mysteries in America. 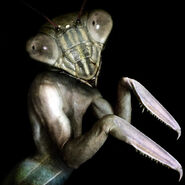 Cryptids Of The World