Cryptid Wiki
Register
Don't have an account?
Sign In
Advertisement
in: European cryptids, Feline, Poisonous and Venomous Cryptids,
and 8 more

Originally documented in Persia, the feared man-eating Manticore or Manticora, has said to been sighted in places as varied as the jungles of Brazil and Indonesia and, more rarely, the forests of North America and Europe.

It is described as having the head of a human, body of a lion and a tail of poisonous spines, similar to porcupine quills. There are some recounts that the spines can be shot like arrows, thus making the manticore a lethal predator. It eats its victims whole, using its triple rows of teeth, and leaves no bones behind.

A Manticore's face is said to resemble a human's, and travelers through marshes have reported mistaking a manticore for a bearded man from a distance.

The picture to the left is a depiction from a woodcut from 1607, showing how the features often confused those that saw it.

Manticores have a melodious call, like the lower notes on a flute blown together with a trumpet. Despite the beauty of the sound, most animals know to flee when they hear it. Humans would do well to follow their lead. 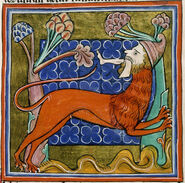 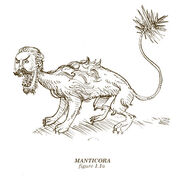 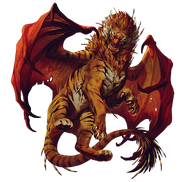