Cryptid Wiki
Register
Don't have an account?
Sign In
Advertisement
in: Humanoids, Cryptids, North America (Minus Mexico and Caribbean),
and 4 more

The Mannegishi is a cryptid and myth of the Cree Natives of Canada.

According to one Cree schema of the mythology, there are two humanoid races, one being the familiar human species and the other being the "little people", i.e. Mannegishi. These people are said to live between rocks in the rapids. One of their biggest delights - a completely non-heroic form of trickster behavior - is to crawl out of the rocks and capsize the canoes of people canoeing through the rapids, spinning them to their death.

The Mannegishi has attracted interest in recent years due to its possible cryptozoological connections. It is believed by some that the Dover Demon represents a modern sighting of the Mannegishi.

They are described as pygmy, human-like entities, that resemble  'little men', with long thin legs and arms.  They are said to have twelve fingers (six on each hand).  Their round, bulbous, hairless heads, with large eyes and no nose, are apparently quite big in comparison to their small bodies.  According to the Cree Indians, the mannegishi are responsible for the pictographs found on rocks in the area, and their dwelling places are among the rocks near rapids.  It is said that they are great tricksters and apparently enjoy playing pranks and jokes on humans.

They are described as being semi-humanoid, and being sexdactylous .

Some, like zoologist and cryptozoologist Karl Shuker, believe that the Mannegishi and Dover Demon are the same thing as their descriptions and locations are nearly identical.

The Dover Demon is a small humanoid reported from Dover, Massachusetts. It was the subject of an intensive scare during the 1970s, when multiple witnesses came forward with their sightings. The Dover Demon is described as looking sort of like the "gray" variety of alien, except that it has skin of a rosy orange instead of sickly gray. The Dover Demon has a large head on a small, stick-like body. It can be bipedal, but it often travels on all fours or switches back and forth between the two modes of locomotion.

The city of Toronto once had numerous streams and waterways that now exist underground; buried and running through tunnel and sewer systems. The Algonquian tribes of Canada (including Cree) spoke of small man-like hairy creatures, the Mannegishi, that thrived in these rivers before they were hidden away from the public. In 1978, a similar monkey-like creature was sighted living in an underground tunnel in Toronto.

The Mannegishi is the main character of a children's book written by Troy Townsin. In this story Mannegishi LOVES to hide and he startles others by singing "NA NA NA NA NEE NEE YOU CAN'T SEE ME!". Each fun-filled story also contains short, repetitive singing parts that children can join in on as well as a look-and-find that becomes part of the action. Each book contains a historical account of each monster. Partial proceeds from the sale of these books donated to the First Nations Family and Caring Society. 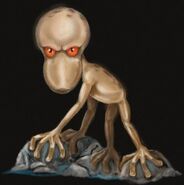 The Dover Demon
Community content is available under CC-BY-SA unless otherwise noted.
Advertisement