Makara (Sanskrit: मकर) is a sea-creature in Hindu mythology. It is generally depicted as half terrestrial animal, such as a crocodile, and in hind part as aquatic animal, in the tail part, as a fish tail or peacock's tail feathers. At Ta Prohm, near Angkor Wat and built by the epic builder king Jayavarman VII in the late 1100s, a small carving on a crumbling temple wall seems to show a dinosaur - a lizard, to be exact. The hand-sized carving of the Hindu-Buddhist Makara can be found in a quiet corner of the complex, a stone temple engulfed in jungle vegetation where the roots of centuries-old banyan trees snake through broken walls.

After parts of Tomb Raider were shot here, the temple got a PR lift and has become one of the site's top tourist draws. But many of the package tours are still ushered in and out without spotting the enigmatic dinosaur carving.

Several different theories have been advanced to explain its

presence. Some maintain that the ancient Khmers

could have unearthed a fossil and figured out what kind of creature it belonged to. One theory has it that the image actually shows a cow or rhino with a palm tree in the background - the palm's fronds being easily mistaken for the fin-like blades running down a lizard back.

Or maybe the carving is evidence that dinosaurs really did live on until much later than previously thought. Perhaps here in the humid, ancient jungles of Southeast Asia, where the climate has remained largely unchanged since the dinosaurs' days, giant reptiles lived on well into the human era - long enough to persist in the Khmer folk-memory. If only these walls could talk, we might have a clue.

the "chu-srin", and also denotes a hybrid creature. It is the origin of the word for crocodile 'mugger' (मगर) in Hindi. The English word 'mugger' evolved meaning one who sneaks up and attacks another. The name is applied to the Mugger crocodile, the most common crocodile in India, and is descriptive of its aggressive feeding behavior.

Meanwhile, Josef Friedrich Kohl of Wurzburg University and several German scientists claimed that makara is based on dugong instead, based on his reading of Jain text of Sūryaprajñapti.

During the Vedic times when Indra was the God of heaven, Varuna, the Vedic water god became the God of the seas and rode on makara, which was called “the water monster vehicle”. Makara has been depicted typically as half mammal and half fish. In many temples, the depiction is in the form of half fish or seal with head of an elephant. It is also shown in an anthropomorphic (abstract form) with head and jaws of a crocodile, an elephant trunk with scales of fish and a peacock tail. Lakshmi sitting on a lotus is also a depiction in which she pulls the tongue of the elephant shaped makara is meant to project Lakshmi’s image as the goddess of prosperity, wealth and well being. It represents a chaotic state, which eventually is restored to a state of regular order. Makara is also the emblem of Kamadeva, the vedic god of love and desire. It is also known as ‘Makara-Ketu’ which means “long tailed makara.” It is the tenth sign of the Zodiac, called rasi in Sanskrit, which is equivalent to the zodiacal sign of Capricorn (goat symbol).

On November 15, 2013, an alleged monster creature has surfaced in Vietnam, with many scratching their heads due to the claims of how it was found. According to Japanese new site Karapaia, the monster was dug up in Vietnam rather than found at a beach or near the water. It is clearly a faked photo though.

Typically sea monsters and large corpses are often found from an oceanic source, so this claim is what's causing quite the stir online. The find caused widespread speculation as to what it could be, some suggesting it was a link to the Loch Ness Monster or was some sort of sea dragon or water dinosaur. Others surmised it was a mutant fish or some sort of shark species. “It’s hard to know what we’re dealing with,” A PROMAR (Programa en Defensa de la Fauna Marina-Sea Life Defense Program) spokesman Paco Toledano told Ideal.es Ameria, according to Inexplicata. “It’s very decomposed and we cannot identify what it is."

“Perhaps we could learn something more from the bones, but to be precise, it would be necessary to perform a genetic analysis, which is very expensive and who would pay for it?"

“Anyway, we have submitted the information to colleagues with more experience and knowledge to see if they can tell us something more specific.” 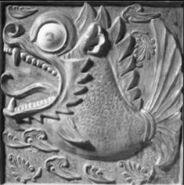