Start a Wiki
Mahamba is a cryptid rumoured to lurk in the Democratic Republic of the Congo's Lake Likouala around the swamp region.

It is purported to be an enormous crocodile, reaching lengths of up to 50 feet (15 m). Some have speculated that it is a freshwater relic of the mosasaurs — huge, sea-dwelling lizards which were presumed extinct by the end of the Cretaceous period.

The Bobangi aboriginals have proclaimed this animal to be unlike any other they have seen, and have only compared it to other creatures, such as a Nkoli (the Bobangi word for crocodile) or the legendary Nguma-monene for the sake of comparison. It is also been reported to attack and devour rafts and canoes.

Some theorize it could be an unusually large sized crocodile, either from a know species or an entirely new species of large crocodilians.

A living fossil, possibly a descendant of a prehistoric crocodilian that didn't go extinct 65 million years ago. 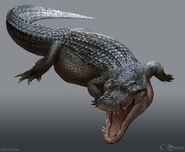 Add a photo to this gallery
Retrieved from "https://cryptidz.fandom.com/wiki/Mahamba?oldid=103809"
Community content is available under CC-BY-SA unless otherwise noted.