Cryptid Wiki
Register
Don't have an account?
Sign In
Advertisement
in: Cryptids, Humanoids, North America (Minus Mexico and Caribbean),
and 13 more

The Loveland frogmen, also known as the Loveland lizards, are cryptids who derive their name from the area they inhabit, nearby Loveland, Ohio. The creatures themselves have been sighted in Clermont County.

The Loveland frogmen are reportedly bidpedal frogs. This would make them the only species of frog that are bipedal.

The Loveland frogmen are bipedal frogs as made evident due to their leathery skin as well as their webbed hands and feet. The creatures have frog-like heads with wrinkly skin on top of them. They are around 1 meter tall.

The Loveland frog is known to live in Clermont County, Ohio. The creature lives in a temperate forest and is able to survive the cold winters of the region without having to hibernate.

The frogmen apparently have the physical ability to use sticks like tools. However, they also have an ability as they can use those sticks to emit sparks like a wand. This could mean that the frogs have an ability to control electricity in some way.

These amphibious anomalies have shocked and terrified both businessmen, farmers and police officers and remain one of the most intriguing cryptozoological mysteries in the United States.

One of the most intriguing cases encountered is that of the Loveland Frogmen, or Loveland Lizards. The story of these unique creatures begins in May of 1955, on a lonely stretch of road that runs along the Miami River in Clermont County, just on the outskirts of a small town known as Loveland, Ohio.

At approximately 3:30 a.m., an un-named business man claimed to have witnessed three, bipedal, quasi-reptilian entities congregating by the side of the road. The man pulled his car to the curb and observed these creatures for what he estimated to be about three minutes.

During this time he noticed that these strange beings stood between 3 and 4-feet tall, were covered with leathery skin, and had webbed hands and feet. Their most distinguishing characteristic, however, was their distinctly “frog-like” heads, which the man claimed bore deep wrinkles where their hair should have been.

Just as the man was about to steal away, one of the creatures suddenly held what the witness could only describe as a “wand” above its head. The anonymous source further claimed that sparks spewed out of the end of this device. He left posthaste.

Thus begins the bizarre legend of the Loveland Frog Men. This tale would be fascinating enough if it ended there, but the two most significant encounters in this case – and indeed two of the most significant encounters in the annals of cryptozoology – were yet to come. At about 1:00 a.m., on March 3, 1972 – nearly 17 years after the first report – a police officer (who understandably chose to remain anonymous) was travelling along Riverside Road heading towards Loveland when he saw something that would forever change his life. The officer claimed that he was driving slowly, due to the substantial amount of ice on the road, when he saw what looked like a dog by the curb.

Suddenly, the animal darted in front of the cruiser, forcing the officer to slam on the brakes in order to avoid a potential collision with the creature. Once the police cruiser came to a halt, its headlights fell upon the prone animal; at this point the officer describes something that seems literally too bizarre to be true. In the span of seconds this crouched, frog-like creature, stood on two legs, stared back at the police man, then scrambled over the guard rail and scurried down the embankment, finally disappearing into the Ohio River.

The officer in question described the creature as being 3 to 4-feet tall and weighing in the area of 50 to 75 pounds. He also claimed that its skin had a leathery texture and that the animal’s features resembled those of a frog or lizard. Another officer investigated the scene later that evening. He saw no sign of the creature, but reported that there were distinct “scratch” marks on the guard rail where the animal purportedly crossed.

The second sighting occurred two weeks later while police officer Mark Mathews had an encounter of his own. According to the report, officer Mathews, while driving into Loveland, spotted what he believed to be an injured animal lying on the pavement. Mathews climbed out of his cruiser with the intention of removing the carcass from the already ice-slicked road, when the creature abruptly lurched upwards into a “crouched” position.

Taken aback by the Frog Man’s Reptilian visage, Mathews unholstered his revolver and took a shot at the creature, which then proceeded to hobble over to the side of the road and step over the guardrail – all the while keeping a watchful eye on the trigger-happy officer. Mathews’ “Frogman” matched the first officer’s description down to the last detail, with the exception of a tail, which was absent in earlier reports.

In the years which have followed these events, Officer Mathews has reneged somewhat on his tale. He now claims that the animal in question was nothing more than a large reptile which escaped from its owner. He further insists that the only reason he shot at the creature was to help confirm a fellow officer’s story – a story which was, of course, being met with predictable skepticism by their superiors. Whether or not Mathews’ change of heart was inspired by ridicule or the fading memory of an event from which he was 30 years removed, the fact remains that his own testimony counter indicates his later retraction. In a 2001 e-mail interview, Officer Mark Mathews, now retired, explained that the incident was "habitually blown out of proportion ". He stated that, "It was and is no 'monster'. It was not leathery or had wet

matted fur. It was not 3-5 feet tall. It did not stand erect. The animal I saw was obviously some type of lizard that someone had as a pet that either got too large for its aquarium, escaped by accident or they simply got tired of it. It was less than 3 feet in length, ran across the road and was probably blinded by my headlights. It presented no aggressive action." Mathews attempted to shoot the creature in order to back up the account of his partner's sighting a few nights prior, but the lizard escaped, most likely to die from its injury, or from the bitter freezing cold.

A frogman was spotted in mid-August 2016 by Sam Jacobs and his girlfriend while they were playing Pokemon Go in Cincinnati. The location of the sighting casts doubt on its authenticity.

There is a lack of precedent for a bipedal frog. Additionally, the frogmen live in Ohio which is a very human-populated region of the United States of America. The creature is only known from one specific region, and there is seemingly no Native American folklore of this creature. There is no video evidence that did not come from a suspicious encounter and the creature seems to have unusual, perhaps supernatural, abilities.

Artist's rendering of the hand of the monster 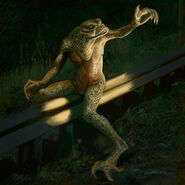 Creature going over a railing

Artist's concept of the creature going over the railing 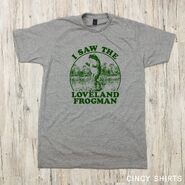