Cryptid Wiki
Register
Don't have an account?
Sign In
Advertisement
in: Candidates for deletion, Oceanic Cryptids, Aquatic-based Cryptid,
and 11 more

This page is a candidate for deletion.

If you disagree with its deletion, please explain why at Category talk:Candidates for deletion or improve the page and remove the {{delete}} tag.

Remember to check what links here and the page history before deleting.

Lotan is vicious, gargantuan seven-headed serpent date back to well over 1,000 years BC. Known collectively to the Semitic Canaanites, the Sumerians, the Mesopotamians and the rest of the ancient Syro-Palestinian world as the “The coiling serpent,” “the fleeing serpent” or “the powerful with the seven heads,” the Lotan is considered by many researchers to be a precursor to the most famous of all sea serpents: Leviathan. That having been said, there are some scholars who believe that the reference made to the Lotan’s “seven heads” may also be associated with the Greek myth of the Hydra.

According to legend, the Canaanite God Baal slew this colossal seven-headed serpent in a battle of epic proportions. Most modern scholars agree that after the Israelites conquered the region known as Palestine in approximately 1000 BC., they incorporated the legend of the Lotan into their own culture, dubbing the beast Leviathan.

It has been suggested that tales of this animal might well stem from early eyewitness accounts from ancient mariners who had had the misfortune of encountering the notorious Giant Squid while traveling the Mediterranean trade routes. 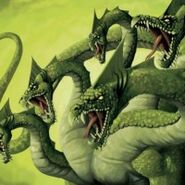 If it isn't a multi-headed monster.
Community content is available under CC-BY-SA unless otherwise noted.
Advertisement