A globster is an unidentified mass that washes up ashore. However, not all of them are cryptids: some are confirmed to be a known species. The most famous is the Montauk monster, a small creature.

Sketch of the Stronsay Beast, 1808 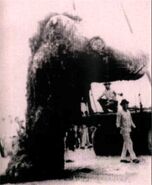 Swansea Eel, 2016
Add a photo to this gallery

Not on this wikia:

No images on this wikia:

Retrieved from "https://cryptidz.fandom.com/wiki/List_of_Globsters_and_Blobs?oldid=101910"
Community content is available under CC-BY-SA unless otherwise noted.