Lechuza are either shape-shifting witches or spirits in Hispanic folklore. Tales of Lechuza are quite popular in Mexico and Texas.

Appearance: A human-sized bird with a woman's face

Lore: Lechuza are women who have sold their souls to the devil in exchange for magical powers. At night, they transform into monsters with a bird's body and a woman's face, similar to depictions of harpies in Greek mythology. They then fly through the night in search of prey.

When a Lechuza finds her target she will perch in a location where she can't easily be seen and then will make either strange whistles or the sound of an infant crying. Anyone who attempts to determine where the sound is coming from is at risk of becoming Lechuza's dinner. Lechuza will then swoop down and carry off the confused and horrified individual.

In modern times, most reported run-ins with the witch-bird involve her swooping down at cars driving deserted roads at night.

Powers: As a witch, Lechuza possesses supernatural powers. One of the powers of the Lechuza is to summon storms. Sightings of Lechuza are believed to coincide with thunderstorms. Lechuza possess the power to shape-shift into bird-monsters at night. Lechuza also possess the ability to disguise their voices to appear as if it is the cries of an infant in order to draw it's human prey closer. Finally, it is believed that hearing the cry of the Lechuza is an omen that someone in the household will die, a trait more commonly found in tales of the banshee. Lechuza are immune to weapons and bullets and possibly are immortal.

Defense Against Lechuza: Lechuza fear salt. Upon hearing the call of a Lechuza one should immediately began cussing her out. Doing so will drive her away. Don't go outside to investigate hearing a strange whistle sound or the sound of a baby crying. 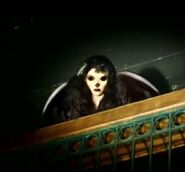 Lechuza from Monsters and Mysteries in America
Add a photo to this gallery
Retrieved from "https://cryptidz.fandom.com/wiki/Lechuza?oldid=102151"
Community content is available under CC-BY-SA unless otherwise noted.