The Herrington Lake Monster is a strange lake monster of Lake Herrington that looks like a mix between a pig and a serpent.

Kentucky that is said to move at amazingly fast speeds. People say it has the snout and tail of a pig, and sometimes even the head of a pig. People say it is usually 12-15 feet long. It is said to move as fast as a speedboat. Witnesses have reported this creature to be very shy, usually staying quite aways away from the boat they are on. One time, two dogs ended up with a pig's head that no one knew how they received it, as the nearest slaughterhouse was miles away. Most people do not believe in it and are very skeptical, as the waters are shallow and there are large catfish in the lake. Still, people wonder about the creature... 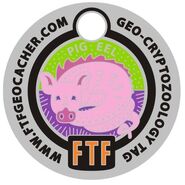 PIG EEL in today's Pop Culture. Image belongs to FTFGuy.
Add a photo to this gallery

Retrieved from "https://cryptidz.fandom.com/wiki/Lake_Herrington_Monster?oldid=105630"
Community content is available under CC-BY-SA unless otherwise noted.