The Lagarfljót Worm or Iceland Worm Monster is a giant worm-like creature that lives in the Icelandic lake of Lagarfljót. It is described as being longer than a football field, 200 feet long. Sometimes, it is even reported as being as long as Lagarfljót lake itself.

This worm has many humps as it swims through the murky water, often looking quite serpentine. It has also been reported coiled up or slithering up trees. It lives in the murky waters of Lagarfljót lake, Egilsstaoir, Iceland. Its first reported sighting was in 1345, and its most recent sighting was in 2012, which either means these creatures have an extremely long lifespan (700+ years), or there is a small population living in the lake. There is also a legend that it was a lindworm thrown into the lake.

In a book called “Icelandic Folk and Fairy Tales,”  folklorists May and Hallberg Hallmundsson describe a folklore origin of the worm.

"At one time, long, long ago, there was a woman living on a farm in the Lagarfljót district, close by the stream where it broadens into a lake. She had a grown daughter. Once, she gave her daughter a gold ring.” The woman instructed her daughter to catch a snake and keep the gold ring underneath it in her linen chest (as, apparently, one did long ago in rural Iceland). She did so, “but when the girl went to look at her ring again, the snake had grown so large that the chest was beginning to come apart. Then the girl was frightened and she picked up the chest with everything in it and threw it into the lake. A long-time passed, and gradually people became aware that there was a serpent in the lake, for it was beginning to kill both people and animals crossing the waters."

Part of the lake 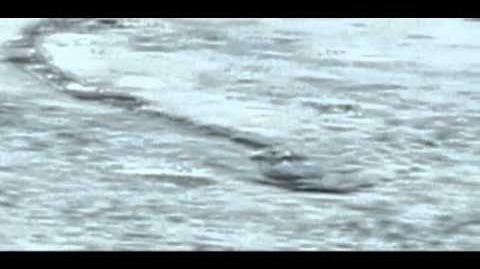