Cryptid Wiki
Register
Don't have an account?
Sign In
Advertisement
in: Cryptids, North America (Minus Mexico and Caribbean), Aquatic-based Cryptid,
and 13 more
English

The Kraken is a colossal legendary sea monster said to dwell off the coasts of Norway and Greenland. In 2012, scientists discovered a giant squid that corresponded to the physical description of the Kraken, using deep sea exploration with special lighting displays designed to attract large predators.

The sheer size and fearsome appearance attributed to the Kraken have made it a common ocean-dwelling monster in various fictional works.

Kraken is also one of the largest (if not the largest) cryptids that may have ever existed, and is so far the only thing in the Massive category.

The 13th century old Icelandic saga Örvar-Odds saga tells of two massive sea-monsters called Hafgufa ("sea mist") and Lyngbakr ("heather-back"). The Hafgufa is believed to be a reference to the Kraken. Whales are the biggest of everything in the world, but the Hafgufa is the greatest monster occurring in the water. It is its nature that it swallows both men and ships and whales and everything that it can reach. It is submerged both by day and night together, and when it strikes up its head and nose above the surface, then it stays at least until the turn of the tide.

It could be possible the kraken could have been early sightings of a colossal squid. "Kraken dung" has been found on the shores by Vikings but it has been proven to be amber. The legend may actually have originated from sightings of real giant squid that are variously estimated to grow to 13–30+ m (43–100+ ft) in length, including the tentacles. These creatures normally live at great depths, but have been sighted at the surface and have reportedly attacked ships.

Artist’s rendering of the Kraken

Kraken From Clash of the Titans 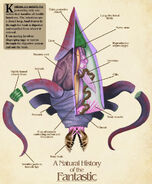 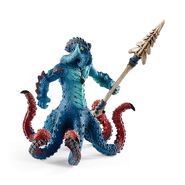 Krakens x Ray in Godzilla Kotm. While the name of the x Ray says leviathan. The location being the Indian Ocean. (Where kraken was contained by monarch) proves that this a x Ray of kraken

The Kraken in Lost Tapes
Русский
Community content is available under CC-BY-SA unless otherwise noted.
Advertisement