Cryptid Wiki
Register
Don't have an account?
Sign In
Advertisement
in: Dinosaurs and Pterosaurs, Cryptids, Flying and Gliding,
and 10 more

Kongamatos are large pterosaur-like cryptid living in semitropical regions of Africa, particularly in Zambia, the Congo, and Angola.

It resembles a pastiche of folkloric flying monsters. Its name means 'breaker of boats' or 'overturner of boats', as the kongamatos are said to have capsized the canoes of natives and attacked people who ventured too close to the nearby rivers. It is described as a reddish lizard with membranous wings and teeth in its beak. Its wingspan ranges from 4 to 100 feet across. When shown a picture of a pterosaur, natives said that it was a picture of a kongamato. The accounts told of these creatures are similar to the ones that describe the ropen of Papua New Guinea, as well as with several other creatures. There are several historic reports of European explorers being attacked by large winged creatures, and quite often people were reported to have received wounds from the kongamatos. It is thought to eat mostly fish, but occasionally humans. Kongamato is also said to dig graves and steal human corpses, because in Africa the burial usually not too deep. It is interesting to note that a good portion of modern kongamato sightings happen in a prime birdwatching site and yet birdwatchers never report anything, indicating that Kongamato may in fact be a case of mistaken identity.

One of the earliest reports of the kongamatos is from traveler Frank Melland. It is depicted in his 1932 book In Witchbound Africa.

It could be a case of mistaken identity, although it could also be a living pterosaur. 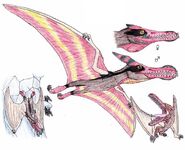 If it isn't a living pterosaur.