Cryptid Wiki
Register
Don't have an account?
Sign In
Advertisement
in: No Modern Sightings, Cryptid Wiki, Cryptids,
and 9 more

Kitsune is a Japanese fox spirit, similar to the Korean Kumiho and Chinese Huli Jing. (Known as the Werefox.)

Kitsune (ki.tsu.ne) is the Japanese word for Fox. Foxes are a common subject of Japanese folklore; kitsune usually refers to them in this context, and are akin to European faeries.

Stories depict them as intelligent beings possessing magical abilities that increase with their age and wisdom. Foremost among these is the ability to assume human form. While some folktales speak of kitsune employing this ability to trick others—-as foxes in folklore often do—-other stories portray them as faithful guardians, friends, lovers, and wives. Foxes and human beings lived in close proximity in ancient Japan; this companionship gave rise to legends about the creatures Kitsune have become closely associated with Inari, a Shinto kami or spirit, and serve as his messagers. This role has reinforced the Fox’s supernatural significance. The more tails a kitsune has—-they may have as many as nine—-the older, wiser and more powerful it is. Because of their potential power and influence, some people make offerings to them as to a deity.

Kitsunetsuki (also written Kitsune-Tsuki) literally means the state of being possessed by a Fox. The victim is always a young woman, whom the Fox enters beneath her fingernails or through her breasts. In some cases, the victims’ facial expression are said to change in such a way that they resemble those of a fox.

Japanese tradition holds that fox possession can cause illiterate victims to temporarily gain the ability to read. Though foxes in folklore can possess a person of their own will, Kitsunetsuki Is often attributed to the malign intents of hereditarily fox employers, or Tsukimono-suji. Folklorist Lafcadio Hearn describes the condition in the first volume of his Glimpses of Unfamiliar Japen: Strange is the madness of those into whom demon foxes enter. Sometimes they run naked shouting through the streets. Sometimes they lie down and froth at the mouth, and yelp as a fox yelps. And on some part of the body of the possessed a moving lump appears under the skin, which seems to have a life of its own. Prick it with a needle, and it glides instantly to another place. By no grasp can it be so tightly compressed by a strong hand that it will not slip from under the fingers. Possessed folk are also said to speak and write languages of which they were totally ignorant prior to possession. They eat only what foxes are believed to like—-tofu aburagé, azukimeshi, etc—-and they eat a great deal, alleging that not they, but the possessing foxes, are hungry. He goes on to note that, once freed from possession, the victim will never again be able to eat tofu, azukimeshi, or other foods favored by foxes . Exorcism, often preformed at an Inari shrine, may induce a fox to leave its host. In the past, when such gentle measures failed or a priest was not available, victims of kitsunetsuki were beaten or badly burned in hopes of forcing the fox to leave. Entire families were ostracized by their communities after a member of the family was thought to be possessed. In Japen, kitsunetsuki was noted as a disease as early as the Heian period and remain a common diagnosis for the abnormal behavior displayed by the afflicted individuals. In the late 19th century, Dr. Shunichi Shimamura noted that physical diseases that caused fever were often considered kitsunetsuki. The belief has lost favor, but stories of fox possession still appear in the tabloid press and popular media. One notable occasion involved allegations that members of the Aum Shinrikyo cult had been possessed. In medicine, kitsunetsuki is an ethnic psychosis unique to Japanese culture. Those who suffer from the condition believe they are possessed by fox. Symptoms include cravings for rice or sweet red beans, listlessness, restlessness, and aversion to eye contact. Kitsunetsuki is similar to but distinct from clinical lycanthropy.

Stories of Tamamo-no-Mae being a legendary fox spirit appear during the Muromachi periodas otogizōshi (prose narratives), and were also mentioned by Toriyama Sekien in Konjaku Hyakki Shūi. Edo period folklore then conflated the legend with similar foreign stories about fox spirits corrupting rulers, causing chaos in their territories.

In the story told by Hokusai, formed in the Edo period, the nine-tailed fox first appeared in China and possessed Daji, a concubine of the Shang dynasty's last ruler King Zhou. She enchanted the king and brought on a reign of terror that led to a rebellion that ended the Shang dynasty. The fox spirit fled to Magadhaof Tianzhu (ancient India) and became Lady Kayō (華陽夫人), concubine of the crown prince Banzoku (班足太子; based on Indian tales of Kalmashapada the man-eater), causing him to cut off the heads of a thousand men. It was then defeated again, and fled the country. Around 780 BC the same fox, returned to China, was said to have possessed Bao Si, a concubine of the Zhou dynasty King You. It was again chased away by human military forces.

The fox stayed quiet for some period. Then she appeared in Japan as Tamamo-no-Mae, the most favoured courtesan of Emperor Toba. She was said to be a most beautiful and intelligent woman, being able to answer any question asked. She caused the Emperor to be extremely ill and was eventually exposed as a fox spirit by the astrologer Abe no Yasuchika, who had been called to diagnose the cause of the Emperor's poor health. A few years later, the emperor sent Kazusa-no-suke (上総介) and Miura-no-suke (三浦介) to kill the fox in the plains of Nasu.

In the 1653 Tamamo no sōshi (玉藻の草紙), an addendum was added to the story describing that the spirit of Tamamo-no-mae embedded itself into a stone called the Sesshō-seki. The stone continually released poisonous gas, killing everything that touched it. The stone was said to have been destroyed in the Nanboku-chō period by the Buddhist monk Gennō Shinshō (源翁心昭), who exorcised the now-repentant fox spirit. He held a Buddhist memorial service after the deed, allowing the spirit to finally rest in peace.

The stone split in two on March 5, 2022.Cracks in the stone had been seen several years before the split, possibly allowing rainwater to penetrate and weaken it, so it is highly likely that the stone cracked naturally.Some humorously speculated that this had freed Tamamo-no-Mae, but social media in Japan predicted that dark forces had been released. 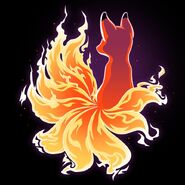