Kingstie was a cryptozoological lake monster invented in 1934 as an echo of the 1904 Lake George Monster hoax.

It was reported as "a strange creature with the head of a dragon and eyes of fire" in Lake Ontario near Kingston, Ontario, Canada.

It is explained in the book Lake Monster Mysteries: Investigating the World's Most Elusive Creatures as follows: "As a prank, they had fabricated a semblance of the creature using a barrel filled with empty bottles for buoyancy and fitting it with a dragon-like head, rope and anchor to keep it in one place, and twine attached to the rope that ran underwater to the shore of Cartwright Bay to permit them to bob its barrel body and head up and down". (As quoted by Joe Nickel, writing for the Skeptical Inquirer.) 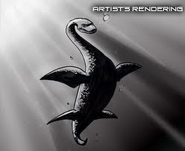 In The Secret Saturdays, Kingstie is a long, horned and one eyed axolotl-like creature that can fly.