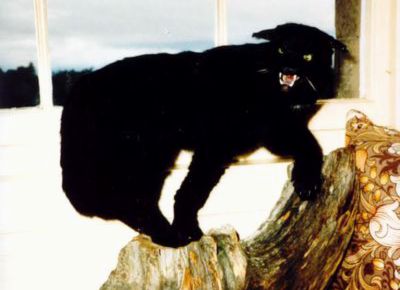 The Kellas Cat is a small black feline found in Scotland. Once thought to be a mythological wild cat, with its few sightings dismissed as hoaxes, a specimen was shot and killed in 1984 by a gamekeeper named Ronnie Douglas and found to be a hybrid between wild and domestic sub-species of Felis silvestris (the domestic housecat). It is not a formal breed of cat, but a landrace of felid hybrids. The specimen was named by cryptozoologist Karl Shuker after the village of Kellas, Moray, where it was first found. Shuker suggested that the cait sìth of Celtic legend is based on folk memory of Kellas cats.

The Kellas cat is described as being over 65 cm (25 inches) long, with powerful and long hind legs and a tail that can grow to be around 30 cm (12 inches) long. A specimen is kept in a museum in Elgin.